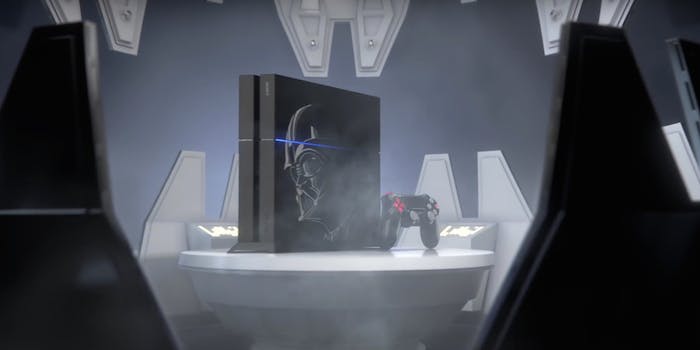 PlayStation goes to the dark side with console inspired by this Sith Lord.

Star Wars and PlayStation are bringing the dark side to your gaming this fall with a new limited-edition Darth Vader-inspired PS4 console. The console was announced at the D23 Expo as a part of two upcoming bundles.

The bundles will both include a custom Vader console displaying his image and the Star Wars logo as well as a wireless controller with the logo inspired by the chest panel on Vader’s suit. One bundle will include Battlefront Deluxe Edition while the other will include Disney Infinity 3.0: Star Wars Edition. Each bundle will also have four vouchers for classic games Star Wars: Jedi Starfighter, Super Star Wars, Star Wars Bounty Hunter, and Star Wars: Racer Revenge. This will be the first time gamers can play these on the PS4.

The announcement did not include information about pricing or when preorders will start, but the bundles will be available Nov. 17.