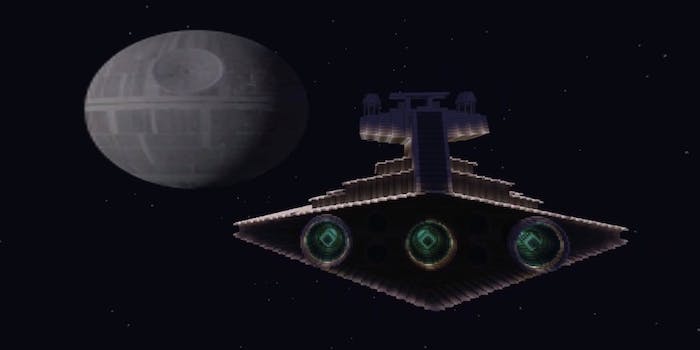 The new trailer for ‘Star Wars: A New Hope’ recreated in ‘Minecraft’ is amazing

Someone is remaking the entire movie in 'Minecraft' and we can't wait to watch.

It’s been three years in the making but we’re one step closer to seeing a completed version of Star Wars: A New Hope completely remade in Minecraft. A new trailer for the fan film was released this week with the man behind the project, Paradise Decay, stating this would probably be the last one before the film’s release next year.

From the Jawas to the Star Destroyers, the details in this remake are amazing. The audio comes from the November 2001 teaser trailer for Star Wars: Attack of the Clones titled “Breathing”—something you’re going to have to remember to do while watching this.

According to Paradise Decay’s website, he’s finished 70 minutes of the film so far with 40 minutes still to go. Lucasfilm is apparently even aware of the project and has emailed him. On YouTube he wrote:

“I had a cool email from Lucasfilm with regards 2015 ‘Star Wars Celebration Event’ it said: ‘This is definitely something that could be doable at Celebration. Thank you for sharing your idea and I wish you the best with it!’”

We’ll have to wait and see if that means a screening of the film might happen at the Celebration event in Anaheim, Calif. The entire film will be free to watch on Paradise Decay’s website in 2015, but without sound. For audio, you’ll need a copy of A New Hope on hand to play at the same time.