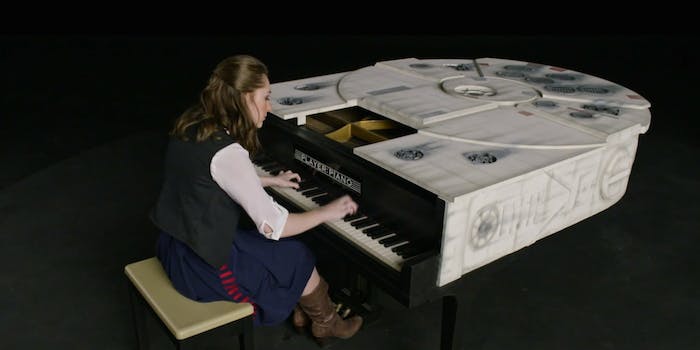 How badly do you want this piano?

Soon Star Wars fans will be able to listen to brand new music from the galaxy far, far away when The Force Awakens arrives with a new score by legendary composer John Williams. Until then, if you want to listen to Star Wars music but want something a little different from the classic scores, this epic 10-minute arrangement from YouTube channel Player Piano might be what you’re looking for.

The team of pianist and composer Sonya Belousova and filmmaker Tom Grey released a musical medley of the saga’s beloved soundtrack on Thursday. The video tribute includes familiar themes like the iconic main title and “Princess Leia’s Theme.”

As she has in the past, Belousova modded her pianos to pay homage to her musical material and transformed her performance space to enhance the effect.

Belousova dresses like Han Solo, Princess Leia, and other characters as she performs on more than one custom-made piano. She begins with a Millennium Falcon-themed piano before introducing one that Player Piano described as “Vader black.” Later, Belousova reveals an R2-D2 design for the grand finale.

Add to those pianos the fabulous sets—which have Belousova and her piano surrounded by red and green lightsabers—and it’s hard not to want to immediately marathon watch all six films.