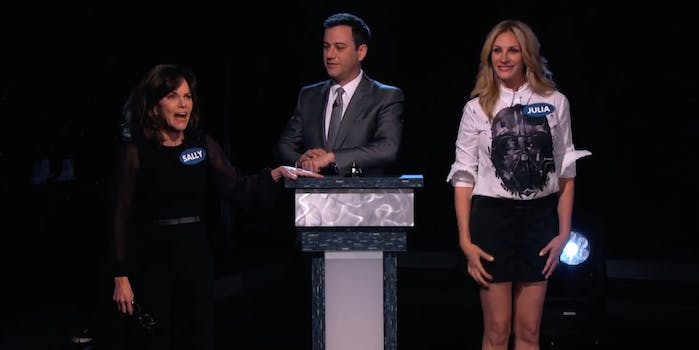 When we first saw Rodarte’s Star Wars–inspired dresses at New York Fashion Week, we thought it was just an awesome geek-chic anomaly. Then when Preen featured its Darth Vader line at London Fashion Week, we started to wonder if Star Wars might become a big fashion trend this year. Now it looks like that could become a reality, thanks to celebrities bringing those sci-fi fashions off the runway to their appearances across the country.

The first celebrity Star Wars style sighting was just a day after the franchise’s May the Fourth holiday. Actress Kirsten Dunst may have been a day late, but she brought geek chic to one of the hottest fashion events of the year the Met Gala, a benefit for the Metropolitan Museum of Art’s Costume Institute.

Julia Roberts was the second actress to be seen sporting one of these Star Wars Fashion Week styles. She made an appearance on Jimmy Kimmel Live! Monday night and looked to be wearing one of Preen’s abstract Darth Vader shirts. While it was covered with a black top for most of her sit-down interview, it’s on full display during her “Celebrity Curse Off” with fellow actress Sally Field.

Who knew major stars would be the ones to start making these designs a trend? They weren’t the only ones apparently inspired by pop culture this week, either. While not Star Wars–related, the Met Gala also saw actress Katie Holmes wearing what looked to be a dress inspired by Belle’s gown from Disney’s Beauty and the Beast.

This is spot on for Katie Holmes #MetGala dress inspiration—> hello, #disney pic.twitter.com/MKF9BC5TWg”

So are we in the midst of a pop culture-and-fandom revolution in the high-fashion world? If we search our feelings, we hope it’s true, but only time will tell.