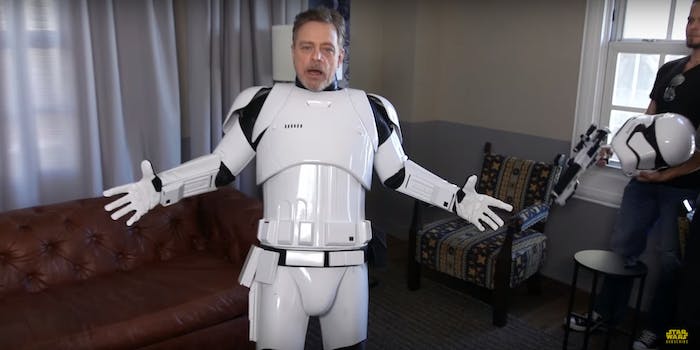 Different duds, same schtick, for a good cause.

Luke Skywalker is a little short for a First Order stormtrooper, but no one on Hollywood Boulevard seemed to notice.

The new charity drive, a joint venture between Omaze and Lucasfilm, ends on Friday. The more you donate, the more chances you earn to win one of two grand prizes: trips to either London or Los Angeles to meet the cast of The Force Awakens at a red carpet premiere, plus free flights and 4-star hotel accommodations.

Unlike Ford, Hamill doesn’t reveal his identity to passersby—which makes it all the more hilarious when he receives a comment from a fan who says she’s really in love with “Mark Hamilton.”

All of the money raised through the charity campaign will support 15 causes selected by the cast of The Force Awakens.