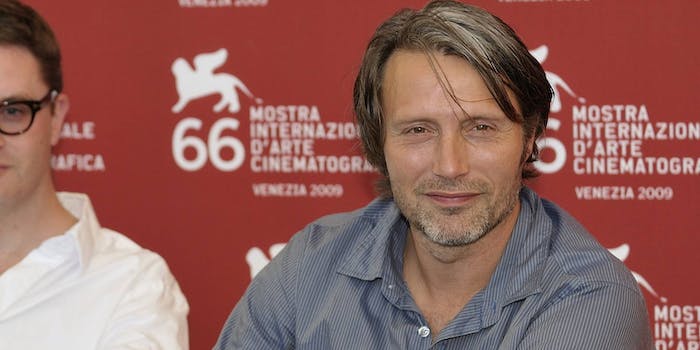 Did Mads Mikkelsen just give away who he’s playing in ‘Star Wars: Rogue One’?

Was this a slip-up or a carefully orchestrated reveal?

In a brief glimpse through Disney‘s veil of Star Wars spoiler secrecy, actor Mads Mikkelsen may have just given away who he’s playing in the upcoming standalone film Rogue One.

Speaking to Sky News, Mikkelsen first said that he wasn’t allowed to say anything new about the movie, before letting slip that he was playing the father of Jyn Erso, Felicity Jones‘s character.

It’s unclear whether he genuinely slipped up or whether he was just teasing the audience by pretending that the reveal was accidental. Either way, this is sure to add more fuel to the endless, ridiculous speculation about potential links in the Star Wars family tree.

Aside from the new information about Mikkelsen’s role, our favorite moment in this interview is when he refers to Rogue One as “the very first one, before anything you’ve ever seen in the Star Wars universe.”

Rogue One is set shortly before A New Hope, the fourth film in the series. Despite being an award-winning movie star, Mikkelsen is known to avoid watching many movies himself. So there’s a strong possibility that he hasn’t seen or even heard of the Star Wars prequel trilogy

In other words, he may really believe that Rogue One is the “first” film in the franchise. Stay chill, Mads.