If you don't already have all of these pieces, this is a great way to get them.

When it comes to music, greatest hits albums are always contentious.

For hard-core fans, they are unnecessary products at best and cash grabs at worst. After all, any real fan already has all the albums on which the hits first appeared. On the other hand, greatest hits compilations are great for casual or new fans, because they deliver the best of the best without all the filler found on other albums. 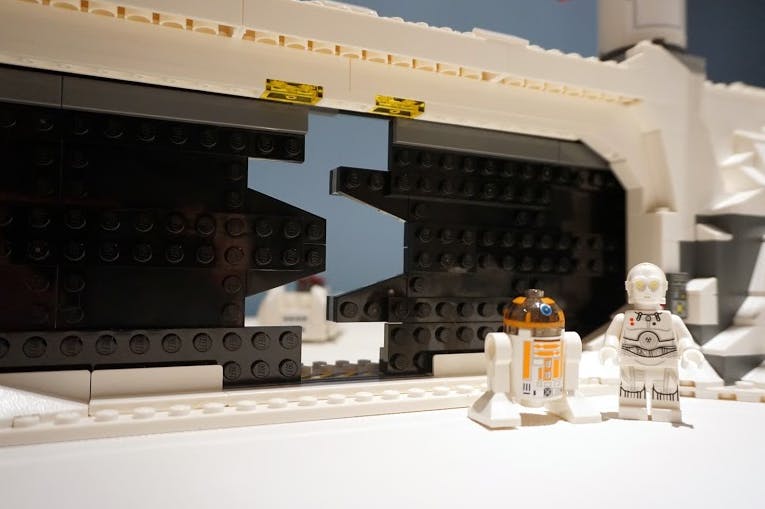 The music analogy holds true here too: If you already have some of the previous sets, you may want to skip this one. But if you’re a newcomer to Lego’s interpretation of the icy planet from The Empire Strikes Back, there are some enticing elements to be found.

The core of the set is the new Echo Base entrance gate, a set of giant double doors that are winched open via a set of gears on the inside. The gate is iconic, of course, because of its role in the movie. Han Solo and Princess Leia argued over closing it before night fell over Hoth. Luke Skywalker was still unaccounted for, and they were debating whether he could survive the plunging temperatures outside the base. Ultimately, the needs of the larger Rebel Alliance won out and the doors were shuttered.

The inside—or rather the backside—of the gate features a small command station complete with translucent screens and a supply loading dock, plus a rolling sled for transporting crates and other sundries. It’s not nearly as big or detailed as the Echo Base set released in 2011, but it gets the point of the interior across. 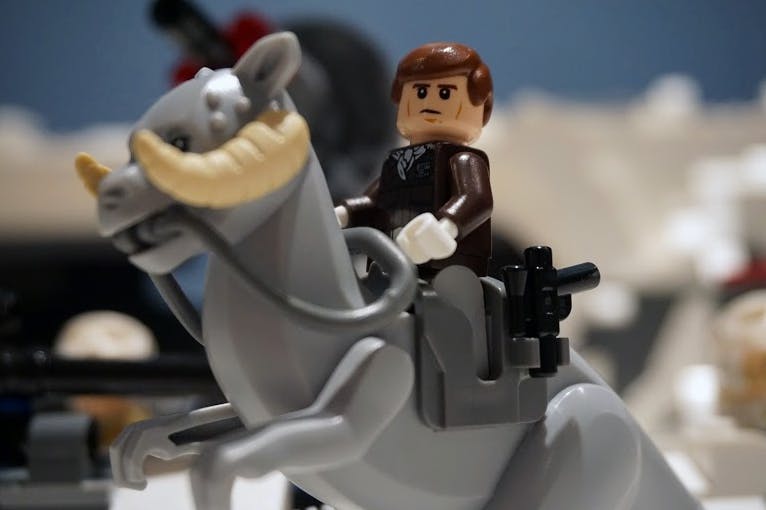 Speaking of missing Luke, he can be found hanging like an icicle in the adjoining Wampa cave. The fierce monster is included as well and, yes, his arm can be pulled off. This is Star Wars, after all, where limbs often go missing. 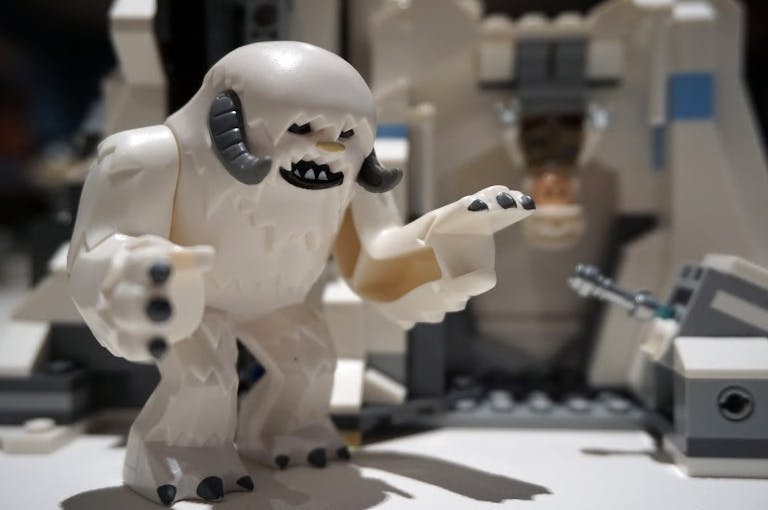 This section is again another smaller version of the 2010 Wampa Cave, which also came with a snowspeeder.

Attack on Hoth also has a snowspeeder, and the version included here is probably the best in a long line of successive Lego iterations, save for perhaps the Ultimate Collectors Series model released in 2003. 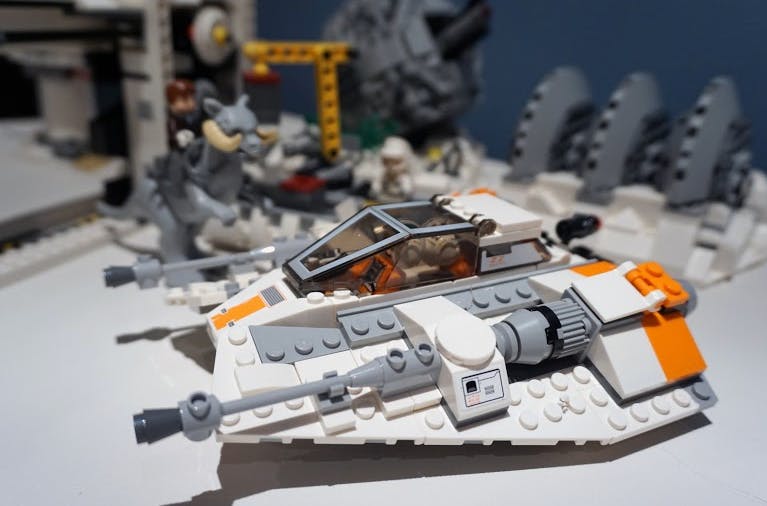 This one has orange markings, which Star Wars nerds will recognize as belonging to Rogue Squadron, and it’s slightly bigger and considerably more stable than previous versions.

Also from the greatest hits department, Attack on Hoth includes an Imperial speeder bike and gun turret, with two snowtroopers to man them. Both elements have appeared in several previous Lego sets.

The same goes for the Rebel defensive encampments and gun turrets. In both cases, the new versions have been slightly updated and expanded from prior sets. 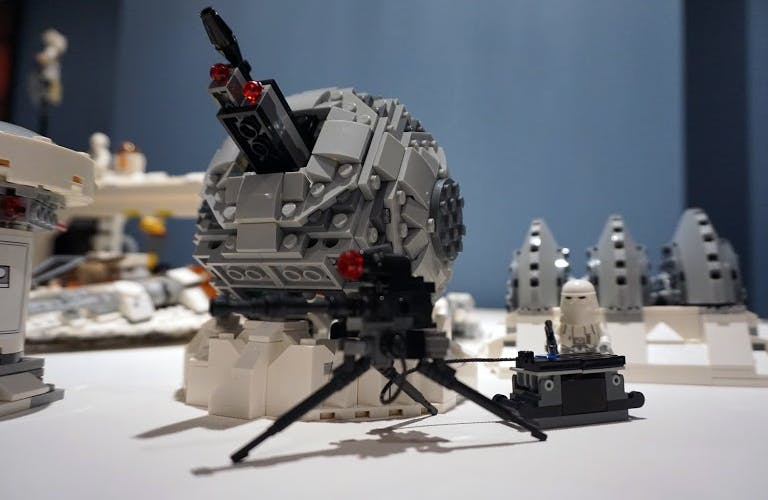 It’s not all rehashes, though. Also totally new is the cool Ion Cannon, as well as the shield generator. The Cannon is a big spheroid that can house a Rebel trooper while the tubular-shaped generator has a trigger-like lever that explodes the conical elements when pressed. If you have the AT-AT that was released last year, you can have loads of fun with that.

In the accompanying manual, set designer Hans Burkhard Schlömer explains that he took one big liberty with the Attack on Hoth set: the crow’s nest-like lookout post, which extends from the main gates. It’s a detail from the Rebels’ forest base on Yavin 4 that isn’t actually seen in The Empire Strikes Back. 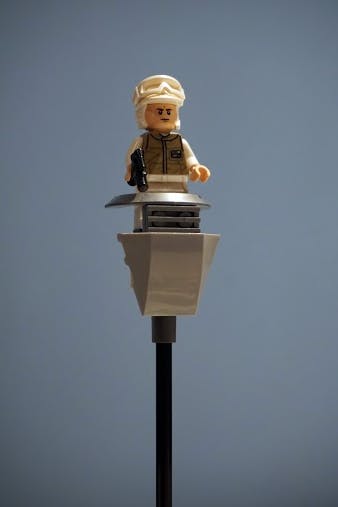 “We just assumed every Rebel base had to have lookouts,” he says. “The rebels need to watch out for approach Imperials, right?”

Minifigure aficionados and fans of obscure Star Wars characters also have lots to look for here. Han and Luke are joined by the likes of K-3P0, R3-A2 and Ion Cannon commander Toryn Farr. That’s in addition to six Rebel soldiers, two snowspeeder pilots, and two snowtroopers.

While Attack on Hoth doesn’t have a ton that’s new overall, it is still a sizeable set that’s fun to build. As Schlömer puts it in the notes, it feels like a bunch of smaller sets rather than one big one, which means it’s easy to build in fits and starts.

It does all feel a little naked without an AT-AT or two, and it’s too bad those are sold separately. For that reason, the set feels like a greatest hits album, but without the biggest single.