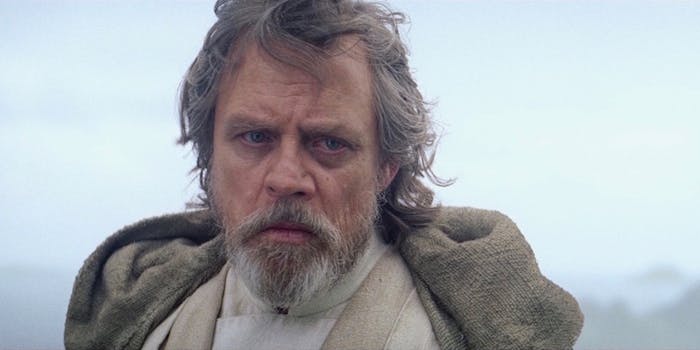 The end of Star Wars: The Force Awakens gave us the answer to one of the film’s biggest questions—Where is Luke?—but his silence upon meeting Rey left us wondering what he would say first to the young woman with his old lightsaber. As it turns out, we might have already found out well before we’ve seen any footage from the film.

At a meeting Wednesday, Disney shareholders were treated to preview footage from The Last Jedi. Naturally fans were intrigued as reporters shared descriptions of what was shown. The shareholders saw multiple shots of familiar characters from The Force Awakens, but it’s what appeared to be the first exchange between Luke Skywalker and Rey that raised eyebrows.

We just saw more "Star Wars: The Last Jedi" footage. In it, Luke asks Rey, "Who are you?" Then we see her deftly handle a lightsaber.

“Who are you?” is sure to be the question of the hour—at least until we see actual footage from The Last Jedi. It’s a loaded one, for sure, and on the surface appears to throw a wrench into all of our Rey theories: Many thought Rey was Luke’s daughter or that she was a young student at Luke’s Jedi academy when Kylo Ren and the Knights of Ren attacked it (part of which is shown in one of Rey’s visions). On the surface it appears Luke has no idea who brought him a lightsaber, but less clear is the tone. Is it that he doesn’t know who Rey is at all? Or does he just not recognize her? Or is he asking her a deeper question than it appears?

Given that Luke had zero dialogue in The Force Awakens, some fans had high hopes for his first line. While they might not fit into The Last Jedi, some cheeky fan suggestions are certainly more creative.

"Got my hand, too?" #LukesFirstWords

Some of the other footage debuted to Disney shareholders includes shots of General Leia Organa, Chewbacca, Finn, an X-wing under attack, and plenty of background shots showcasing some of the film’s settings. We also learned that Disney CEO Bob Iger has seen The Last Jedi, and his review is even shorter than Luke’s probable first sentence.

As for the rest of us, we’ll have to wait awhile to see any of that footage. While the trailer doesn’t have a release date yet many expect it will drop during Star Wars Celebration in April.