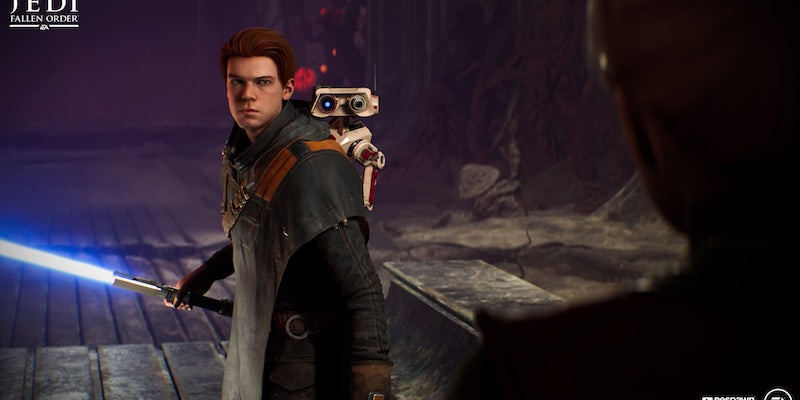 Respawn's take on the Star Wars universe is one of the best games of the year.

To tell you about my time with Star Wars Jedi: Fallen Order, I could tell you about reflecting Stormtrooper’s blaster bolts back at them with ease. I could talk about downing an AT-ST, or dancing between enemy blades. I might recall the desolate grandeur of Dathomir or the isolated interior of an Imperial holding cell.

All this is to say Jedi: Fallen Order is not just a great action game—it’s a fantastic Star Wars story.

Respawn Entertainment has delivered a surefire crowd-pleaser that calls back to the bygone LucasArts era: when Star Wars games were as daring as they were plentiful. The Titanfall 2 developer, tapping in to the design of games like Dark Souls and the modern Tomb Raider trilogy, draw players into such a specific corner of the Star Wars universe it becomes impossible not to feel overwhelmed with a cinematic pastiche.

With all the familiar flair of a soaring score and sound effects, Fallen Order translates the years between Revenge of the Sith and A New Hope (“It is a period of civil war”) into an open sandbox for players to explore freely. While most of the lore, locations, and characters are original to the game, they feel distinctly at place in the larger Star Wars mythos.

You control Cal Kestis: an ex-Padawan who has repressed his force-sensitivity in order to survive after the Jedi purge. Toiling away as a scrapper, Cal’s world comes crashing down when the Empire shows up and draws him into a larger quest. What surprised me the most about Fallen Order is how deep it leans into the spiritual elements of the Force. Cal’s reticence to return to his Jedi training quickly becomes a confident determination to find the future of the entire Order. Of course, we already know what will happen with Luke Skywalker and Princess Leia, but Cal’s story charts a different, introspective course.

Unpacking the fallout of the prequel trilogy and the trauma of the Empire’s rise drive Fallen Order. Stormtrooper grunts react in shock to see a Jedi, and the Inquisitors introduced in Rebels play a major role as key antagonists. While the game lets you live out the fantasy of wielding a lightsaber and force powers, it also recognizes the responsibilities of a Jedi.

Respawn’s spin on hand-to-hand combat is in line with Sekiro’s delicate back-and-forth. The inspiration from “Soulslike” games runs deep, encouraging thorough exploration as well as tense battles at every turn. Armed with the weapon of a more civilized age, you’ll need to parry, block, and dodge more often than you wildly wing your blade. Each enemy has a stamina bar that can be whittled down by clashing and blocking attacks. When that meter has emptied, Cal can move in for damage.

Enemies scale in difficulty across the entire adventure in a way that internalizes the player’s tactical approach. Enemies that may have been more significant encounters on early planets become commonplace by the final chapter—but you’ll never feel unprepared.

Non-linear level design brilliantly brings each new locale to life. Cal’s Force abilities dictate where you can travel at any given time, so you will frequently need to revisit each planet. But this necessary back-tracking is constantly engaging, thanks to hidden secrets and collectible items. Challenging boss fights with local beasts provide another avenue for replayability—even after the main storyline ends.

Digging into every corner of the galaxy made available here was constantly exciting, with a solid variety of environmental puzzles and enemy encounters. I felt like I was growing alongside Cal, as his skill tree branched out with my proficiency in combat.

If there’s anything to knock against the game, it would be consistent performance issues. While the ambition of the world provides stunning views and detailed characters, there were frequent glitches and long loading times throughout my time playing. Nothing was bad enough to delay my progress, but the need for some polish was impossible to ignore.

Jedi: Fallen Order would be an excellent adventure with any title, but it’s the universal appeal of Star Wars that elevates it to another level. Speaking about his role in The Mandalorian, Werner Herzog had this to say about the franchise:

“This universe is filled with new mythology. Not very often in cultural history have we had new mythologies. We had it with ancient Greek mythology, we had it in antiquity, but very rarely…  it’s also a world filled of fantasy, full of fever dreams, full of new characters you never expected.”

This exact mythology is so omnipresent throughout Jedi: Fallen Order. It often feels as if you are moving through a vibrant cinematic experience. When the light fades in at just the right angle, and the score’s strings sweep into action, the game recalls a feeling that any Star Wars fan will recognize.

Cal’s journey (and those of his allies and his enemies) explores familiar territory but also boldly dives into themes and lore that Star Wars has yet to touch on. The journey is striking, compelling, and consistently dramatic. With masterful combat, empowering traversal mechanics and constant innovation, it is an absolute joy to play through.

While this is a fantastic game on its own merits, it also stands as a towering achievement in Star Wars storytelling. I can’t wait to see what’s next for this spinoff and these characters. Fallen Order walks in to a crowded universe with big, unique goals and far surpasses the standard for Star Wars games.

Star Wars Jedi: Fallen Order is available now for PC, PlayStation 4 and Xbox One. This review was written based on an Xbox One version of the game provided by the publisher.