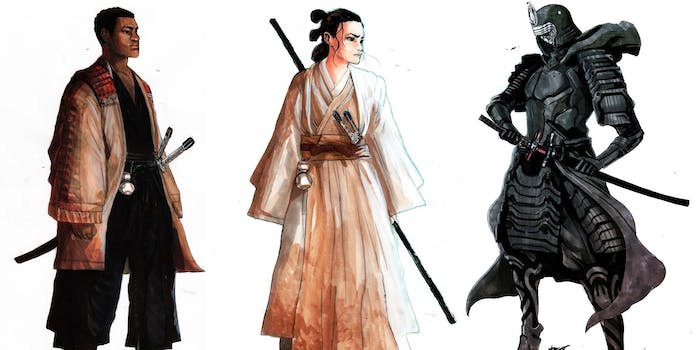 In this incredible fanart series, even BB-8 gets a historical Japanese makeover -- as an adorable dog!

Star Wars: The Force Awakens has inspired an incredible amount of fanart over the last few months, and Nikolas Draper-Ivey‘s samurai redesigns are among the highlights.

Draper-Ivey’s Star Wars art reimagines the characters of The Force Awakens as feudal Japanese warriors—plus BB-8 as a dog. After seeing his detailed and imaginative work on Tumblr, we decided to get in touch and find out more. “It’s no secret that Samurai influenced the Jedi Knights in many ways,” Draper-Ivey said in an email interview with the Daily Dot.

The original Jedi robes were partly inspired by costumes from The Seven Samurai, one of many details that come up in discussions about the franchise’s grab-bag approach to borrowing cultural inspiration from around the world. (Queen Amidala’s wardrobe is another obvious example, directly influenced by Mongolian traditional dress.)

So, in a way, the samurai connection to Star Wars was already there. (Samurai and Force-wielders have long been linked in fans’ imaginations. You can even buy samurai Darth Vader toys.) But Draper-Ivey realized that no one had done anything similar for The Force Awakens—yet. Draper-Ivey wanted to make sure his fanart was as historically accurate as possible, both in terms of costume and weaponry. “I did as much research as I could,” he said. “One of my books that is just titled Samurai Warriors, by David Miller, had some pretty cool reference in there. I also had some saved images of Samurai Armor from the Metropolitan Museum Of Art.” He also wanted the designs to reflect the characters’ roles, which is why BB-8—not exactly a plausible character for feudal Japan—became a dog. “For example, Poe’s design is based off him being the best pilot in the resistance, and I thought, ‘Well what if the X-wing was the horse and instead of lasers it’s arrows?’ I wanted to keep it with the same spirit as the film.” Draper-Ivey doesn’t particularly think of himself as a fanartist, saying, “I’ve only recently begun to embrace [the] fandom side of me.” However, he loves to draw in a wide range of fandoms—Spider-Man, Final Fantasy, The Lion King—when he’s not working on original projects.

A lifelong artist, Draper-Ivey said he draws “day in and day out.” One of his ongoing projects is a manga-influenced comic called Dream Vesper, which he describes as “like a reverse take on Wes Craven’s Freddy Kruger,” directed at some points by Guillermo del Toro and at others by Tetsuya Nomura (Final Fantasy). While it isn’t directly influenced by Paprika, Inception, or Neil Gaiman‘s Sandman, it does share some attributes. It’s a dark, fantastical tale with a protagonist who moves through dreams and nightmares.

Leo Somniorium and Lace, The Dream Vesper… What is Dream Vesper? Dream Vesper is an upcoming series that has been in development for years now and after constant refinement and tuning, I'm finally in a position where I can work on it properly. On the surface, It's about a psychology student that creates nightmares in order save people from pursuing or being content with dreams that will inevitably lead to an untimely demise. This kind of person is called a Dream Vesper. Almost every nightmare you've ever had is because a Dream Vesper caused it. Their job is to save you from an untimely death caused by another ominous entity. (Who I have yet to reveal) The Leo Somniorium is his weapon that functions as an hourglass, a dream catcher and sword. It's abilities and purpose will be discussed at a later date. *For those that want LION (Another series of mine). Trust me, you want Dream Vesper first. Please look forward to future updates. -Nik #nikolasdraperivey #dreamvesper #comics #manga #wip #lacethedreamvesper #artistoninstagram #myownstuff