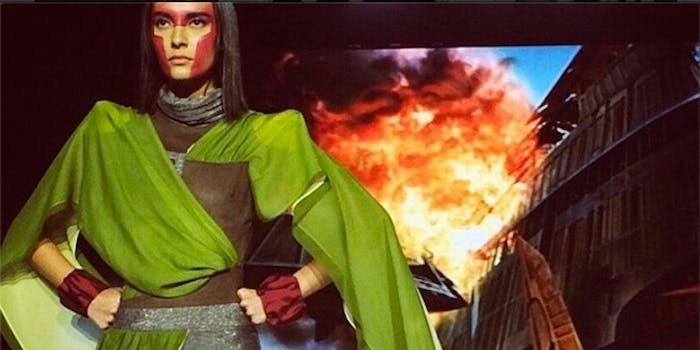 The galaxy far, far away inspires a new round of couture looks.

It’s official: 2014 was the year of Star Wars high-fashion. Kicked off by Rodarte at New York Fashion Week, continued at London Fashion Week, and followed by a geek couture fashion show at San Diego Comic-Con featuring more than one Star Wars design—not to mention the little ways the industry embraced the franchise—the latest appearance of Star Wars couture makes fashion’s journey towards the dark side complete.

Indonesian luxury magazine HighEnd presented a fashion show last week in collaboration with Disney and Lucasfilm called “The Masterpiece Strikes Back: A Fashion Exploration inspired by Star Wars” at the Hotel Indonesia Kempinki Jakarta. A total of 16 designers were involved with the show, which HighEnd has been sharing photos of all week on Instagram. The designers took inspiration from a variety of sources in the franchise such as Darth Vader and the Millennium Falcon.

Leading up to the event, the official Star Wars Indonesia Facebook page shared some of the amazing sketches of the fashions before they hit the runway.

If you think the designers’ sketches are impressive then you won’t believe your eyes when you see the final products. From the outfits to the accessories, it looks like it was an impressive show that succeeded in translating the franchise to that unique, high-fashion runway style.

You can check out some of our favorite photos from the night below and learn more about the designers that participated on HighEnd’s Instagram. Find more photos from the show there, the Star Wars Indonesia Facebook page, and the 501st Legion Indonesia Outpost here.

This flowy dress is #MonicaIvena's work of fashion brilliance. The royalty feel was filled across the room, her masterpiece reminisced us of the elegant Queen Padme Amidala. #TheMasterpiece2014 #starwarsindonesia