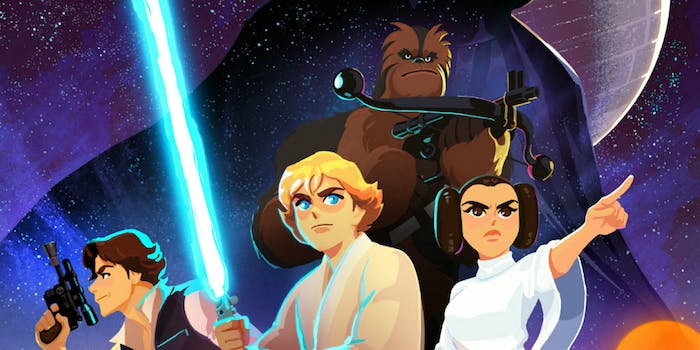 It's Han, Luke, and Leia in a brand new light.

Lucasfilm released several new animated shorts on Friday that are guaranteed to transport new and older fans to a galaxy far, far away.

First announced earlier this week, Star Wars Galaxy of Adventures consists of a series of reimagined and animated moments from the Star Wars saga. Some of the first clips from the six shorts released—which feature Luke Skywalker, Darth Vader, Han Solo, Chewbacca, Leia Organa, C-3PO, and R2-D2—include scenes that fans will be all-too-familiar with. While you’ll certainly hear familiar voices in the clips, Dante Basco (Hook, Avatar: The Last Airbender) is also on hand to do some narration.

The clips are bright and vivid, bringing a certain flair to bigger moments (although the first six clips showcase very little of Leia). While the series is more geared toward young children and those just getting into Star Wars who aren’t ready to invest in the movies, there’s plenty for older fans to enjoy, too.

Galaxy of Adventures joins Star Wars Forces of Destiny as part of Disney’s efforts to introduce Star Wars to a new generation. However, while Forces of Destiny often focuses on unseen moments by many of its heroes (particularly its vibrant female characters), Galaxy of Adventure—so far—is more intent on bringing out the familiar moments in a new light.

According to Lucasfilm, even more Galaxy of Adventures shorts will debut in December and weekly in 2019.