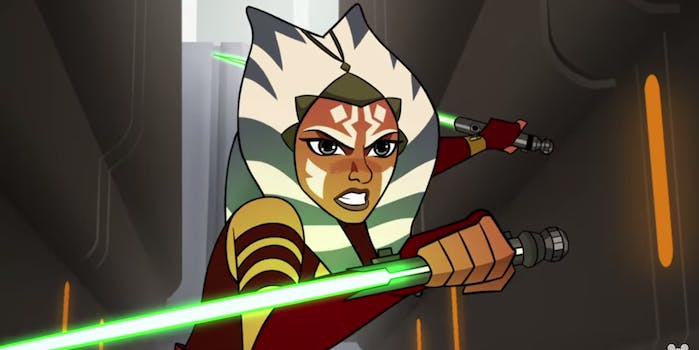 This 'Star Wars: Forces of Destiny' trailer is a tribute to all the badass women of Star Wars.

The Star Wars universe is finally giving us a tribute to all of the badass, empowered women who have graced its storylines for decades with Star Wars Forces of Destiny.

This series of animated shorts will feature backstories for all of the intriguing and capable heroines of Star Wars canon, including Rey, Jyn Erso, Princess Leia, Sabine Wren, Padmé Amidala, and Ahsoka Tano. It will debut beginning July 3.

If you are interested in watching, visit Disney’s YouTube page to see a new short premiering online each day at 1pm ET (10am PT) until the project’s broadcast debut on Disney Channel on Sunday, July 9. If that’s not enough, never fear: According to a press release from Disney, on Aug. 1 Forces of Destiny will roll out a pile of merch, including books, apparel, bedding, and Hasbro adventure figures and role-play items.

You can see a behind-the-scenes video about the making of the series below.

The shorts will follow Star Wars canon, and almost all of the original actors will reprise their roles (with the exception of Leia and Padmé) to really align it with the previous Star Wars releases. For anyone who has been yearning for more of the daring women we love, this show is a must see.