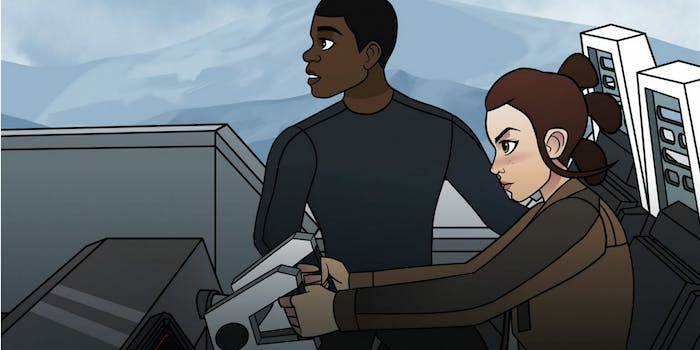 More than a few familiar characters star in these shorts.

Disney and Lucasfilm have plenty for Star Wars fans to feast their eyes on with another batch of Forces of Destiny shorts just in time for May the Fourth.

If you’re looking to avoid new footage from Solo: A Star Wars Story now that the film is only weeks away from release, you’re in luck. The seven new shorts—released less than two months after the last set of episodes—are more focused with just about every other part of the Star Wars timeline. They span across the prequel trilogy and Star Wars Rebels and fill in gaps during Return of the Jedi, The Force Awakens, and The Last Jedi.

One such short answers a question from The Force Awakens:How did Finn and Rey get to the forest after they witnessed Kylo Ren kill his father undetected? The short answer: They didn’t. Finn and Rey have to put their skills to the test as they’re chased by snowtroopers across Starkiller Base.

If it looks familiar to some fans, that’s because a version of this scene is among The Force Awakens’ deleted scenes.

They also expand on the characters we already know and love in a number of intriguing ways. A short starring a young Queen Amidala demonstrates just why the people of Naboo entrusted her with ruling the planet. She’s quick on her feet, resourceful, and able to de-escalate a situation that stumped adult guards.

And how did Chewbacca go from eating porgs to allowing them to freely stowaway on the Millennium Falcon? Sure, there may have been some guilt involved, but he may have possibly had some real bonding moments with the little creatures such as his ploy to get blue moss for a porg nest in exchange for Falcon wires.

Sometimes there’s a larger lesson involved, especially for the Star Wars Rebels characters. As much as Ezra has come to rely on his lightsaber, Ahsoka Tano is ready to remind him that his strength comes from more than just his weapon. And for Sabine and Tristan, liberating their home planet is key, but freeing a symbol from the grasp of Imperial forces is just as important.

And sometimes, the episodes just embrace the fun and action that’s always defined Star Wars. Return of the Jedi link Hera Syndulla, Luke Skywalker, and Leia Organa, and although their enemies vastly differ, teamwork—and the Ewoks—are key to saving the day.