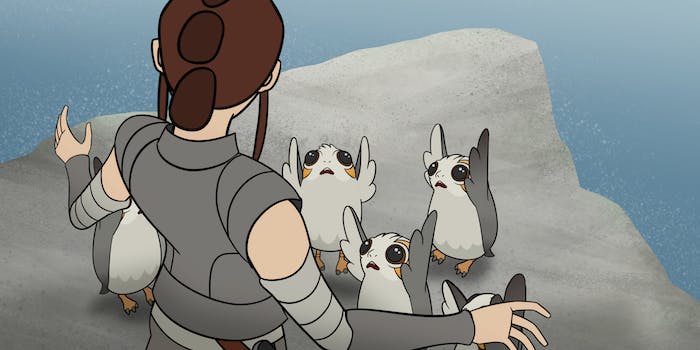 Actors from the movies will reprise their roles.

Having Star Wars withdrawal symptoms while waiting for the release of the new Han Solo movie? Fear not, Monday sees the release of a brand new animated season of Star Wars Forces of Destiny.

The eight episodes tell stories of the adventures had by some of the franchise’s heroes between major sequences, filling in the blanks and carefully crafted into the narrative. The animated shorts touch on the stories of characters from across almost every era in the saga, and introduce new characters like Rose Tico.

In one episode, viewers return to the swamps of Dagobah from The Empire Strikes Back as Master Yoda teaches Luke Skywalker an important lesson. In another, Rose and Finn come across a pod of dangerous creatures on their journey to Canto Bight, a major plot course in The Last Jedi.

Fans might, however, be most excited about the Forces of Destiny Porg debut, in which the mischievous little creatures cause trouble for Rey as she trains on Ahch-To.

To make it all even better, talent from the films will reprise their live-action roles in the series. Stars from The Last Jedi like Mark Hamill, Daisy Ridley, John Boyega and Kelly Marie Tran all contributed.

All eight new episodes of Star Wars Forces of Destiny will debut on Monday, March 19, at 10am PT on both Disney YouTube and www.Disney.com. Then, one week later, on March 25, the Disney Channel will screen all episodes in succession.

Take a first look below at some of the scenes from the episodes: