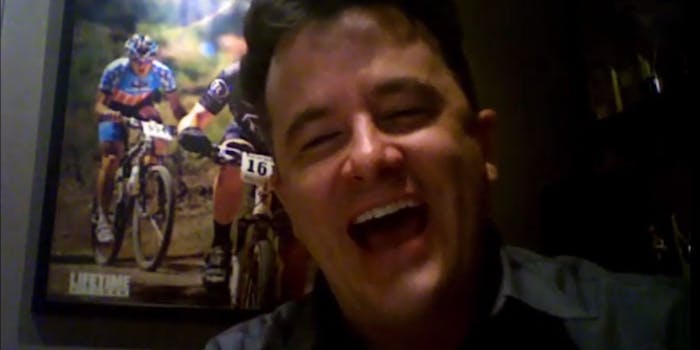 “At Cinema 70 in Colorado Springs… I just couldn’t get it out of my head for 35 years,” he told videographers in a Force for Change donor video—or at least, what he thought was just a donor video.

Barns was in the middle of discussing how important Star Wars was to him at his Denver office when members of the Force for Change team surprised him with the announcement that he’d just won a role in the upcoming seventh film.

Force for Change is an official international Star Wars charity that raised more than $4 milion this year for UNICEF complete with $1 million from Disney pictures. The grand prize? A trip to London and a day on the set of the J.J. Abrams production, complete with the chance to don a costume and film a scene with the regular cast.

Barns was doing a video call with Omaze, the online charity platform that hosted the Force for Change Drive, when he was surprised mid-sentence. Barnes had been telling the Omaze staff what his all-time favorite moment as a Star Wars fan was. He recovered quickly in order to add, “This is probably my favorite.”

Check out the whole heartwarming reveal below.