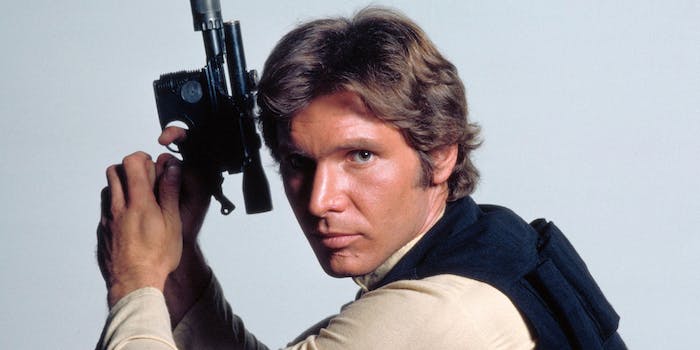 This weekend you can finally watch a trailer for the new Star Wars movie, and it may even include Han Solo.

The Regal Entertainment Group may have just angered the most powerful mouse in the galaxy.

Regal announced this morning that nine of its U.S. theaters will debut the teaser trailer for Star Wars: The Force Awakens over Thanksgiving weekend. Every movie showing in those nine theaters from November 28-30 will feature the eagerly awaited teaser.

Many Star Wars fans were surprised to see news of such a limited rollout for the trailer, which has been the talk of the fan community since rumors about its content began circulating earlier this month. Stunned and annoyed tweets flooded in after Regal announced its deal shortly before 10am ET today.

But Regal may have more to worry about than the fans if some early suspicions about this news are proven correct. It’s possible that the theater company jumped the gun and announced its deal too early. Regal’s Facebook and Twitter posts announcing the news were pulled shortly after they went live. A YouTube video featuring a Star-Wars-crawl-style announcement was also deleted. At press time, the announcement page on Regal’s website was still live.

Representatives from Regal Entertainment Group, Lucasfilm, and the Walt Disney Company did not respond to our requests for comment. But if Regal spoke too soon, expect to see more news about the teaser trailer’s debut later today or this week. Disney will not let a mistaken perception of its Star Wars plans stand for too long.

Disney’s decision to screen the trailer in theaters suggests that director J.J. Abrams is trying to harken back to Star Wars’ classic blockbuster roots, which can only be a good thing. While every other franchise works hard to hype up their teaser trailers online, Star Wars still has cachet as a cult phenomenon that had people queuing round the block to see every previous installment.

Since principal photography on The Force Awakens only finished three weeks ago, don’t expect this to be a full trailer with lots of action sequences and exciting new plot details. While J.J. Abrams has emphasised the use of old-fashioned practical effects, the film still has a year of CGI and post-production to go through before it’s finished, so this trailer will probably be very limited.

Still, it’s safe to expect a few Thanksgiving weekend stories of hardcore Star Wars fans driving across the country to their closest Regal theater—unless, that is, Disney has a few more theater chain announcements for us before the weekend.

For the rest of us, we can just wait until the trailer inevitably leaks online a few days later.