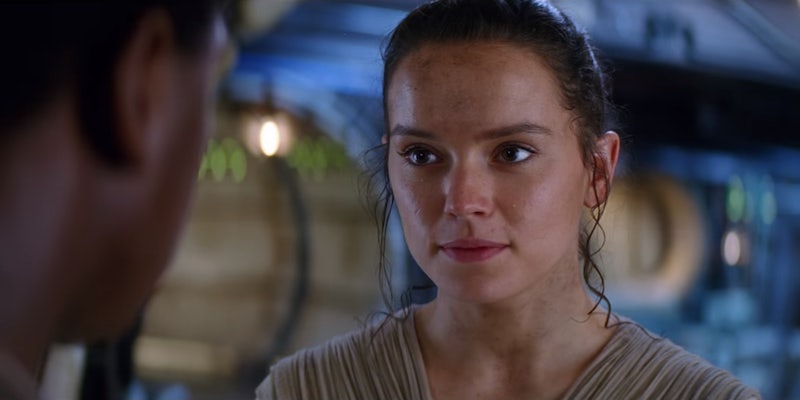 Is Rey this character's daughter? Or a failed clone of that character? Track them all.

By far the biggest mystery to emerge from Star Wars: The Force Awakens is “What’s the deal with Rey?”

The Force Awakens‘s young female lead, played by Daisy Ridley, begins the film as an orphaned scavenger on the desert planet Jakku, a nobody who is thrust onto the epic stage of good versus evil that is the Star Wars saga. But was Rey ever truly a nobody? Many fans have their doubts, and they’ve concocted a wide range of theories about who she really is, where she came from, and what role she will play in the sequel trilogy.

A new Google spreadsheet, created by Reddit user imnotelvis, tracks these fan theories, from the reasonable to the outlandish, listing the evidence for and against each one.

Rey is Luke Skywalker‘s daughter, one theory goes. She is a descendant of Obi-Wan Kenobi, says another. She is the child of Han Solo and Leia Organa and thus the sister of The Force Awakens villain Kylo Ren (aka Ben Solo), according to a third. But have you even heard the theory that “Rey is the product of failed attempts to clone Anakin Skywalker (Darth Vader)”? Yes, that’s out there, too.

Here’s how the spreadsheet listed that one at press time and explained the evidence for it. (No one has added evidence against it.) 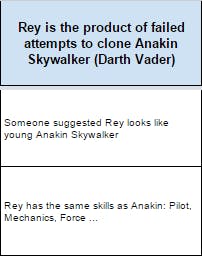 Another theory with several pieces of “evidence” is that Rey is the daughter of Luke and Supreme Leader Snoke, a mysterious villain glimpsed only briefly (and holographically) in the new movie.

As you read theories like these, it’s worth remembering that Star Wars has always inspired off-the-wall speculation. In the leadup to 1983’s Return of the Jedi, some fans speculated that Boba Fett was Luke’s mother under that intimidating helmet. (Hey, Boba did miss when he shot at Luke on Cloud City in The Empire Strikes Back. A bounty hunter worthy of Darth Vader’s company missing a shot like that? Inconceivable—unless Fett was caught up in secret maternal instincts.)

Judging by the amount of “evidence” provided, the theory that Luke is Rey’s father is the most popular at the moment. But several strong arguments also back the theory that Rey is not a Skywalker at all, most of them based on the fact that Kylo Ren’s Skywalker lineage is enough to fulfill the sequel trilogy’s “focus on the Skywalker family saga,” in the words of Lucasfilm president Kathleen Kennedy.

As with all things that come across Reddit’s collective desk, the document has become a venue for jokes. Someone added the theory that “Rey is the Offshoot [sic] of Palpatine’s former kindergarten teacher’s, mother’s daughter’s, cousins [sic], step-son’s best friend.” Under “Evidence against theory,” someone countered, “Because this is completely absurd. It’s the step-son’s girlfriends [sic], best friend.”