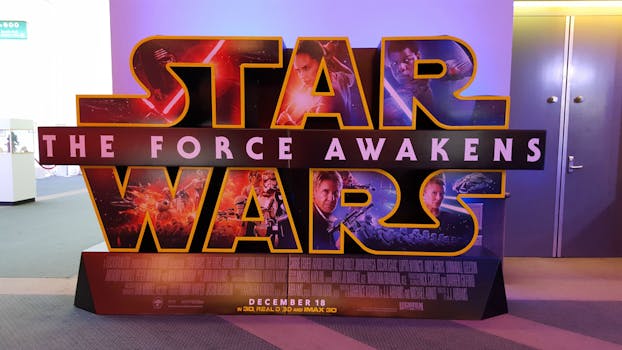 The event Sunday in Los Angeles was a curious experience—to say the least.

The press conference for Star Wars: The Force Awakens was bound to be different, simply because of how little Disney would tell journalists about the movie they were covering.

The event Sunday in Los Angeles was a curious experience, halfway between a professional publicity activity for press and a miniature convention for fans who just happened to be reporters in their day jobs. The press conference itself was the centerpiece, and despite the secrecy, the cast and crew impressed with their camaraderie, commitment to their characters, and passion for the larger universe.

Around the press conference—literally spread out in the event space outside of the Q&A room—Disney built an exhibit floor of Star Wars activities and displays. A trio of screen-used First Order stormtrooper costumes gazed imposingly out into the crowd from a ledge backed by their new empire’s sigil. The hallway leading to the conference room was lined with the costumes of Kylo Ren, Han Solo, and other main characters, as well as art from Lucasfilm’s talent-filled Art Awakens contest. 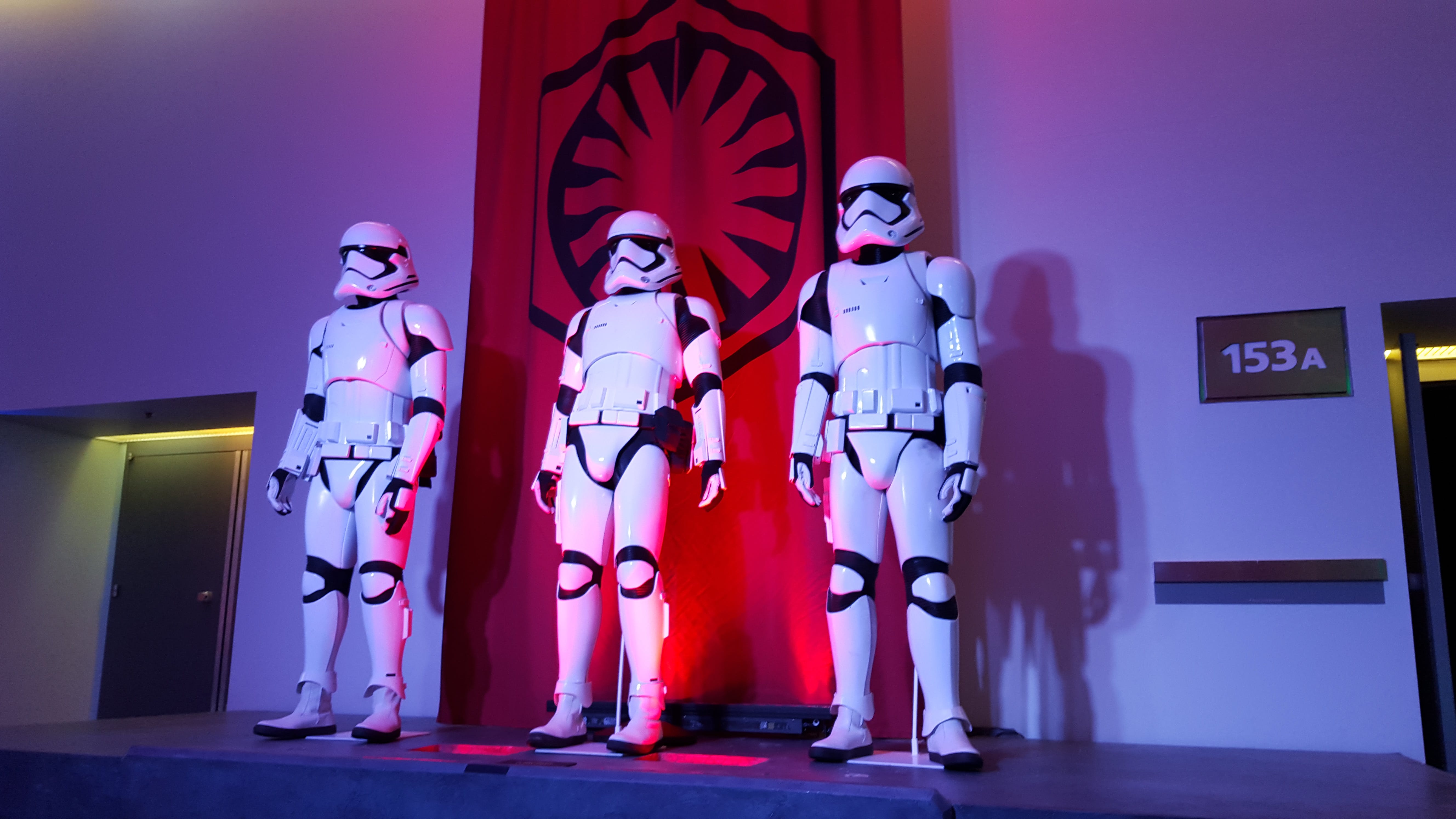 More costumes would greet journalists as they entered the Q&A room, including the awe-inspiring chrome armor of Captain Phasma, and booths near the registration tables showcased a sea of Star Wars merchandise and the Force Awakens-themed level in the Disney Infinity video game. Large-format versions of the dramatic character posters sat near the check-in area, inviting fans to pose with towering versions of the movie’s heroes and villains. Not far from the stormtrooper suits, Disney had placed a guaranteed photo-op hotspot: a massive standee that combined the film’s logo with its now-iconic poster.

As journalists filed in, pledged their Force allegiance, and claimed the appropriate wristband—I chose the light side—several of the film’s most beloved stars posed for pictures with reporters who had temporarily switched into Fan Mode. These stars never tired, because they weren’t human. Rather, they were droids: R2-D2, C-3PO, and the adorable, charming newcomer BB-8.

The ball droid, who became the first real symbol of the blending of new and old in The Force Awakens when he appeared in the November 2014 teaser, was easily the crowd favorite. Thanks to some deft maneuvering on the part of his operator, BB-8 reacted with uncannily realism to the people posing for photos, whether it was their inquisitive body posture, as you can see in the photo of us below, or a request to attend the film’s premiere as the droid’s date.

BB-8 is a real charmer, but 3PO and R2 seemed perfectly happy letting him hog the spotlight. There was no shortage of people waiting to snap a picture with the two iconic robots.

Other activity areas dotted the main event space and kept journalists busy before the press conference began. Over in one corner, you could design your own Star Wars T-shirt, choosing from a handful of options like color and art (the two art choices were the film’s logo and that of Bad Robot, director J.J. Abrams’ production company). Nearby a demo area let journalists test out the new Star Wars virtual-reality experience, Jakku Spy, complete with Star Wars-themed Google Cardboard headsets for our phones.

On the opposite side of the room, people posed for photos in front of a green screen that composited them onto Jakku, where BB-8 stood nearby, ready for action. This BB-8 was digital, not physical, but the line there was shorter than the photo op line with the real droid, and it served as a fun way to pass the time until the photo op line ebbed somewhat.

Shortly before the appointed time, journalists were let into the dark Q&A room for the press conference. This was no ordinary conference room. Rebel Alliance and First Order sigil banners flanked a large version of the film’s logo, all of which were set against a tranquil starfield. About half an hour after Disney began letting people take their seats, actress and comedian Mindy Kaling took the stage and moderated two panels of The Force Awakens talent.

What did we learn from the press conference itself? Not a whole lot. Here are the biggest takeaways.

Out of the blue, Kaling asked Lupita Nyong’o about her character Maz Kanata’s relationship with Yoda. No one in the audience had any clue what she was talking about; this was not a connection we had ever heard of before. Abrams stepped in to rescue Nyong’o, who was understandably unsure of what she could say in this situation. “I do believe that Maz and Yoda at one point had crossed paths,” Abrams said, much to the audience’s surprise and delight.

2) There will be no post-credits scene

Star Wars is not Marvel. In response to a question, Abrams quickly quashed the much-rumored idea of a post-credits scene in The Force Awakens setting up a future movie. Production-wise, that makes sense. Unlike the Marvel films, which are largely sequential, the core Star Wars episodes will be separated by standalone films, making it harder for Lucasfilm to foreshadow through post-credits scenes. (Rogue One, set for release next year, takes place several decades before The Force Awakens.)

Ask any Star Wars fan what question he or she most wants answered about Finn (Boyega) or Rey (Ridley) and the answer you’ll get is, “How are they related to Luke, Han, and Leia?” Many Star Wars fans interpret the absence of last names on Boyega and Ridley’s characters as a sign of a classically Abramsian plot twist of parental proportions. But at the press conference, Boyega suggested that The Force Awakens would leave many questions about Finn and Rey unanswered.

“I was like, to Daisy, ‘There’s no way that our stories are so simple,’” Boyega recalled of his experience reading about Finn. Then, giving Kennedy a look of mock exasperation, he said, “We still don’t know. I’ve still got some conspiracy theories as a fan as to where Finn comes from.”

One of the highlights of the second panel was the comedic relationship between John Boyega and Harrison Ford. Boyega makes no secret of the fact that he was stunned to even be in Ford’s presence when they first started shooting together—a behind-the-scenes featurette shows Boyega smiling broadly as Ford signs a Han Solo toy for his new co-star—and Ford gamely played along as Boyega magnified that dynamic for the benefit of the press conference audience.

Boyega seemed to love teasing Ford with reminders of their time on set, such as when he reenacted Ford’s series of failed attempts to re-holster his blaster.

“Me and Daisy were just behind the camera like, ‘This is frickin’ insane! Harrison’s just frickin’ right there.’ But we had to do the scene together and not freak out. We freaked out, but we didn’t show you nothing.” Then, putting his hands over his heart and and extending them toward Ford with a grin, he added, “We tried to keep it professional for you.” (Ford replied with a dry, “Thank you very much.”)

Boyega also constantly tried to make Ford laugh or admit that the two of them were best friends, and every time Ford refused, either replying noncommittally or totally dismissing the idea that they had a rapport, Boyega would look to the audience and confidently brush off Ford’s gruffness.

At one point, Boyega asked Ford if he could crash on the older man’s couch if his newfound fame became too much for him.

“I hardly know you,” Ford said, leaning toward Boyega and doing an uncannily good impression of Han Solo in his more exasperated moments.

As the audience laughed, Boyega gave the crowd a wide grin, made a dismissive hand gesture, and said, “We’re best friends, he’s just saying that!”

5) Oscar Isaac and BB-8 have something going on

Asked if he had any romantic moments in the movie, Isaac replied, “Mostly with BB-8… There’s a real warmth there, and… that’s who’s got his back in that X-wing.” In a moment that was cut from the recording that Disney shared with journalists but that I remember all too well, Oscar described BB-8, his metal lover, as “those two balls.”

I’m fairly confident that that’s what prompted this reaction from Boyega. 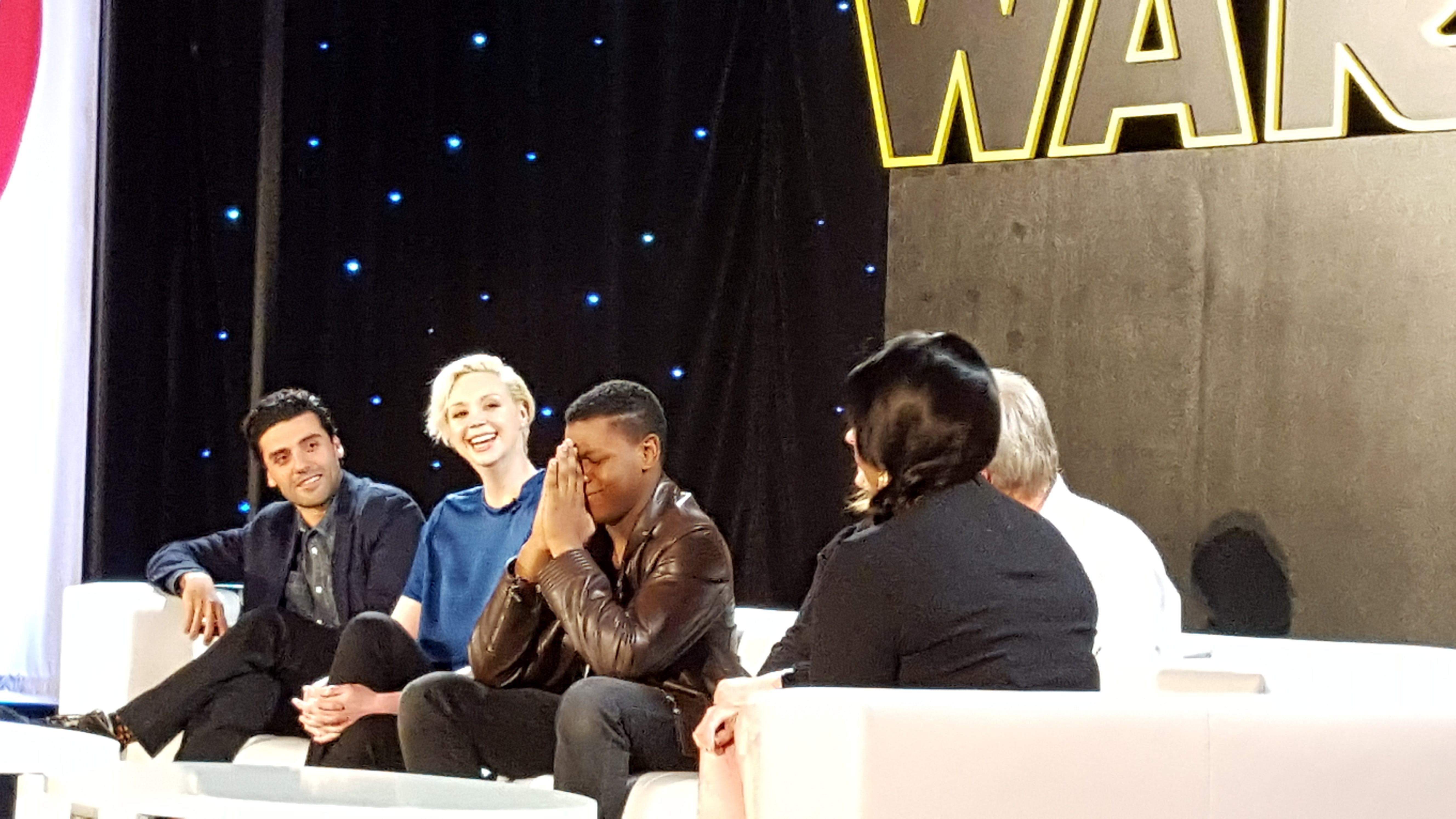 Kaling asked Christie if her character had a “walk-up song” that epitomized Captain Phasma. Christie picked Led Zeppelin’s “Kashmir,” which she identified by performing the song’s most famous section (described on Wikipedia as “an ascending chromatic ostinato over a pedal drone”). Boyega and Isaac were only too happy to help—and the three of them really got into it as they started rocking out onstage.

It’s not clear how many scenes Phasma shares with either Poe Dameron, Isaac’s character, or Finn. We know that Poe and Finn hang out quite a bit after the latter joins the Resistance. Either way, it’s clear that the three actors have tremendous chemistry. Their relationship, as well as that of Ford and Boyega, suggests that the atmosphere on set was, if not exactly “relaxed” given the stakes, at least fun and collegial.