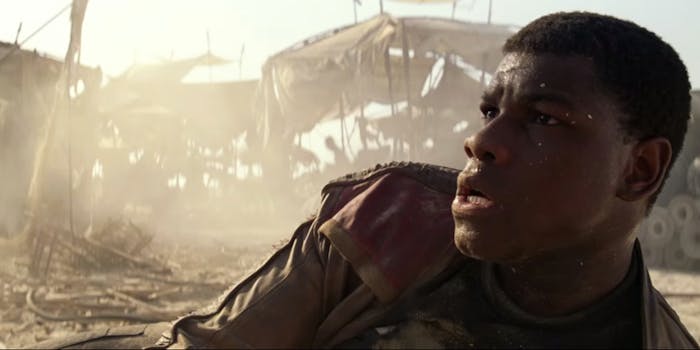 Gaze upon the official poster and logo for ‘Star Wars: The Force Awakens’

You'll be seeing this poster everywhere over the next few months.

Star Wars: The Force Awakens officially opens two months from today, which might be why Disney just released the film’s official poster and announced a new trailer airing Monday night.

Check out the new official poster! Tune in to @ESPN’s Monday Night Football for a new look at #TheForceAwakens. pic.twitter.com/NTRWLlVyID

The biggest reveal in the poster is a new superweapon that recalls the Death Stars of the original trilogy. The lightsaber-heavy artwork puts Rey (Daisy Ridley) front and center and also gives prominent placement to the stormtrooper Captain Phasma (Gwendoline Christie). Evildoer Kylo Ren (Adam Driver) and Finn (John Boyega) occupy opposing sides of the poster’s top. The middle of the poster shows off what could be a new type of capital ship, along with images of trusty X-wings and the Millennium Falcon.

Lucasfilm also said in a statement that “an exclusive new look at the film”—the full trailer—will air at halftime during Monday Night Football tomorrow on Disney-owned ESPN.

The company also announced that individual theater chains will run their own Star Wars movie events this winter and unveiled a “Star Wars Marathon Event” involving a 2D six-movie marathon leading up to The Force Awakens in 3D. Attendees of the Dec. 17 event will get an exclusive marathon lanyard.

Tickets for the marathon and regular showings of the new film will go on sale after the trailer airs.

On Instagram, Boyega wrote, “Many years have passed and now a new journey begins.”

The logo represents a departure from those used in the previous six films, three of which—the prequels—maintained the same style.

Star Wars: The Force Awakens will be in theaters on Dec. 18.

Update 12:02pm CT, Oct. 18: An earlier version of this story said Drew Struzan was the artist behind the new poster. The artist has not yet been confirmed, and the story has been updated for clarity.