Internet freaks out about new lightsaber in ‘Star Wars: The Force Awakens’ trailer

Is the dark side compensating for something?

It was the “bwuh?” heard around the world—not the familiar electromagnetic hum of the old Star Wars lightsaber, but the confused utterances of millions of geeks reacting to, well, this:

What is that? Is it an advanced sword? An ill-designed cross? A new and improved way to amputate your own hand?

“This subreddit for the next year,” joked r/StarWars redditor Mr_Murdoc shortly after the trailer for The Force Awakens landed on iTunes this morning. He was referring to redditors’ immediate reactions to the trailer, which he pithily summed up with this screencap from the reactions thread:

@Gingerhazing I'M OBSESSING ABOUT IT. YOU'D STAB URSELF SO EASILY. IT'S SO DANGEROUS. THE LITTLE POMMEL BITS WOULD GET CHOPPED OFF!!

I bet Sith Lords spend a fortune on new shirts just because the sleeves get burned off by their laser sword guards so much. #sohardtobeevil

Okay, okay. Surely if Darth Maul can wield a broadsword lightsaber, Sith Lords should be able to wield a sword with a flaming laser hilt, right?

Toward a theory of lightsaber blade inflation: pic.twitter.com/TUh1yLB9wF

Believe it or not, however, this lightsaber has its roots in a weapon that was already a part of the Star Wars universe. It’s called a crossguard lightsaber and it appeared briefly in Dark Horse’s Clone Wars comics, where it belonged to a Jedi named Roblio Darté. Darté’s lightsaber was actually a full-length dual-bladed weapon, with the second blade extending from the hilt at an angle.The crossguard approach to the lightsaber hilt was meant to help fend off attacks from other blades. 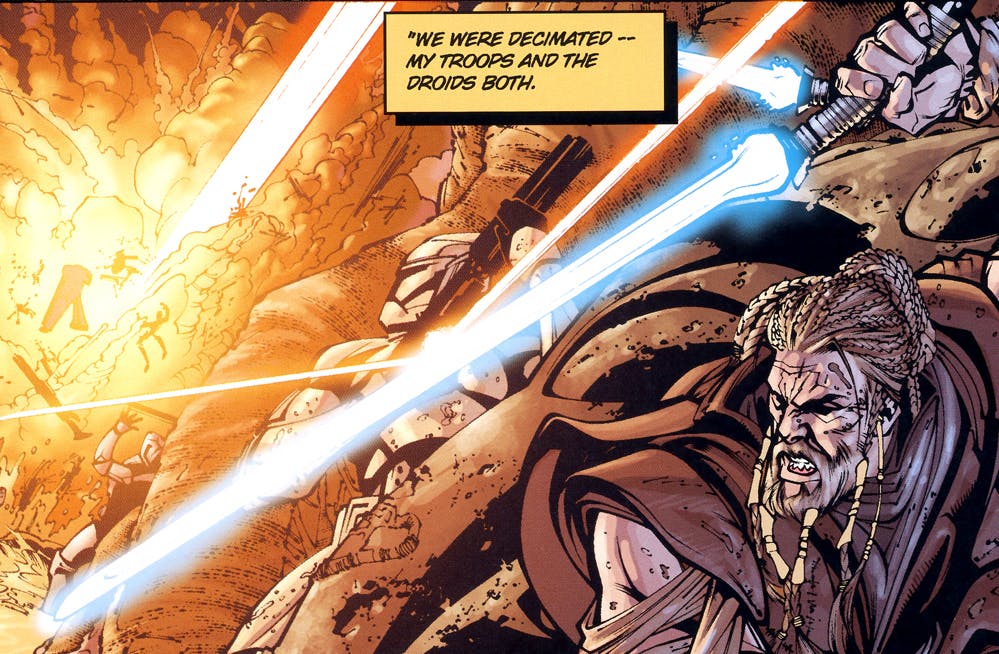 The Clone Wars comics are not part of the official Star Wars canon that the movies have to follow, but it is possible that The Force Awakens‘ creative team had this weapon in the back of their minds.

So if the no-hilt lightsaber has appeared in the Star Wars franchise before, why all the controversy now? Here’s how superninjaturtle on Tumblr described it:

I think the problem is, we’re sitting there wondering what the PURPOSE of the cross saber is.

When Maul broke out that dual saber, it was wizard because we’ve never seen it before. And it was a testament to the Sith’s superiority, being able to create a saber with two crystal. That and, well, it’s fucking useful in a fight. Unless, whoever that is is going to be taking on a bunch of force wielding vampires, I’m just confused right now.

Let’s not kid ourselves: Force-wielding vampires would be awesome. But while half the Internet was overthinking the new weapon’s look, the other half was clearly just here to enjoy the whole trailer experience.

I try to play it cool, but holy shit the Star Wars trailer. #allthegasms

Lightsaber with a cross-guard to prevent the frequent hand dismemberment tactics. They're learning…the sith are learning.