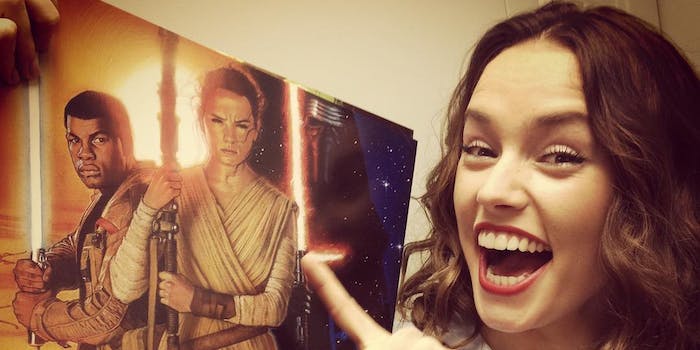 A real-life friendship formed in a galaxy far, far away.

Every time we get new footage from Star Wars: The Force Awakens, it’s a seismic event. But the best part of being a Star Wars fan in the era of social media has nothing to do with new trailers and everything to do with the film’s amazing young leads.

John Boyega and Daisy Ridley, who play runaway stormtrooper Finn and desert-scavenger-turned-hero Rey, have been geeking out online about the incredible journey they’re on together. Fans have enjoyed watching their friendship play out on social media (he calls her “peanut”), with the two of them sharing funny stories about their time in the eye of the biggest Hollywood storm in decades.

But it’s the little things that make their friendship so great—like these Instagram videos showing two perspectives of their 10-hour flight together. Boyega was quite excited about the prospect.

The world will get to see how this friendship translates into an on-screen camaraderie when The Force Awakens hits theaters on Dec. 18.