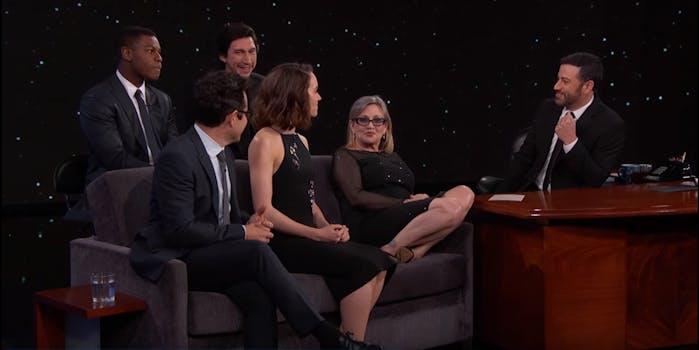 These clips are essential viewing for any 'Star Wars' fan.

Jimmy Kimmel aired a Star Wars extravaganza on Monday night, interviewing most of the main cast of The Force Awakens and quizzing director J.J. Abrams about plot details.

Unsurprisingly, no spoilers were forthcoming from Abrams or any of the actors. But they did film a ton of cute and hilarious segments for the show, which you can now watch on Kimmel’s YouTube channel.

We’ve picked some of the best moments to watch now, beginning with Abrams’ dramatic revelation of the first word spoken in The Force Awakens—and a previously unseen clip of Rey and Finn.

Disney has been obsessively security-conscious about Star Wars spoilers, to the point that we still barely know what the upcoming film is about. With that in mind, several of the Kimmel interviews focused on the intense spoiler-avoidance tactics employed by the cast and crew.

The cast also filmed some Star Wars skits for the show, including Carrie Fisher accidentally sending Jimmy Kimmel a holographic message and Harrison Ford and Chewbacca reuniting after a feud.

Star Wars is one of the few things where a talk show can dedicate an entire episode to one movie and get away with revealing no useful information whatsoever. The cast of The Force Awakens is so charming, we could watch interviews like this all day, spoilers or no spoilers.