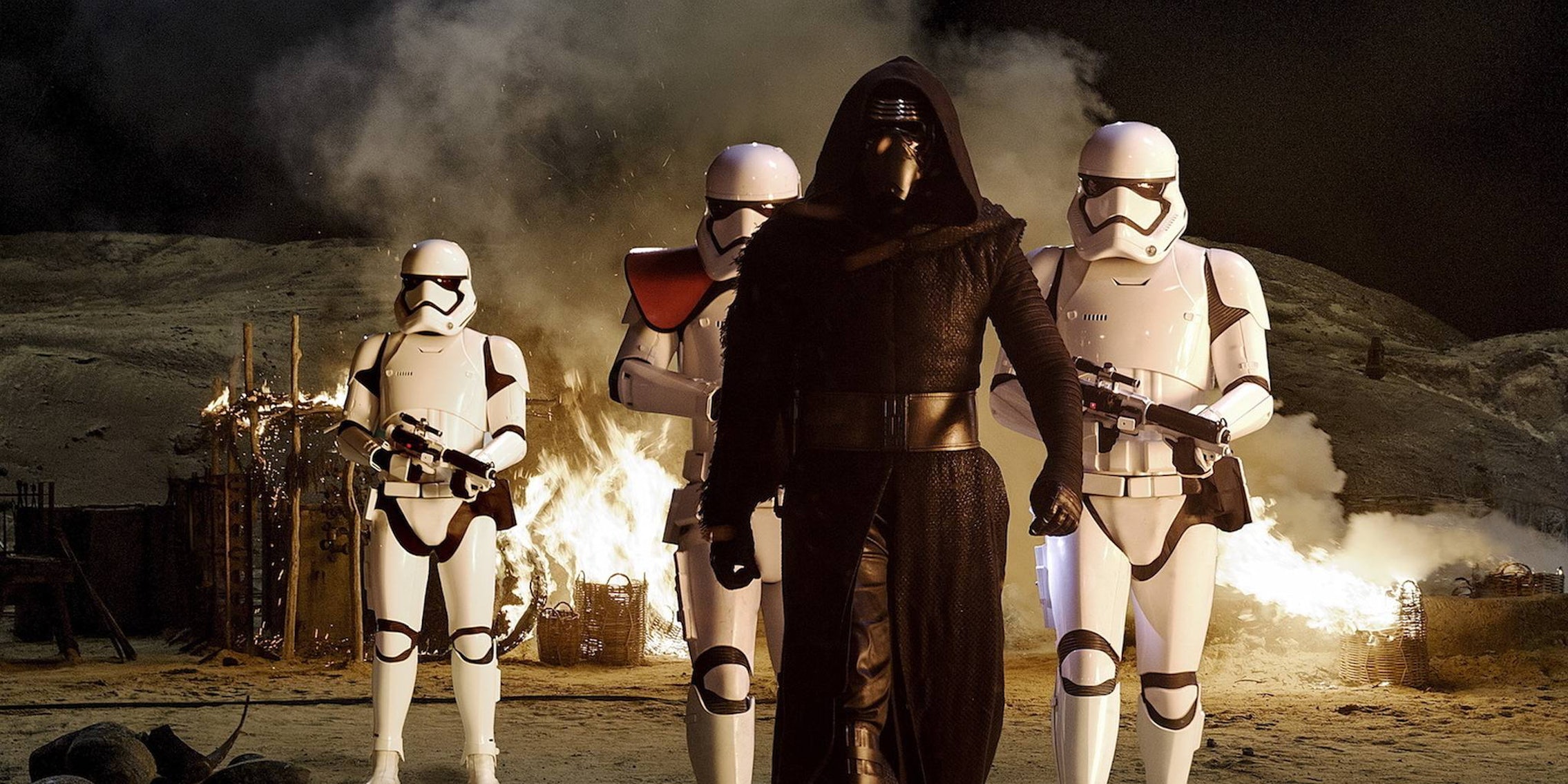 What ‘Star Wars: The Force Awakens’ teaches us about life as a stormtrooper

Are stormtroopers a terrifying army of faceless drones or the victims of cult brainwashing?

In the first six Star Wars movies, the Empire’s stormtrooper army was an uninvestigated mystery.

The stormtroopers have their roots in the clone army secretly commissioned by Darth Sidious, which first appears in Attack of the Clones, but by the time of A New Hope, it was unclear what lurked behind those expressionless white helmets. Were stormtroopers hired soldiers or Imperial loyalists? Were they even human? The original trilogy never explored why someone would choose to work for the Empire, and the stormtroopers ended up being seen as something of a punchline: an endless conveyor belt of robotic yet incompetent footsoldiers who infamously missed their target almost every time.

In The Force Awakens, we finally met a stormtrooper—FN-2187, aka Finn—and we got a plausible explanation for why the previous generation kept failing to kill their enemies. Their poor aim may have reflected the popular theory that many conscripted soldiers couldn’t make themselves fire at the enemy in the trenches of World War II—an issue that led the U.S. Army to introduce human-shaped targets at its firing ranges.

Perhaps some stormtroopers weren’t fully invested in a fight to the death, which would explain why Captain Phasma told Finn to submit his blaster for inspection. His blaster shots (or lack thereof) were being logged; if any stormtrooper failed to shoot during a firefight, it would be a clear sign that they need to be punished—or “reconditioned.”

The Force Awakens introduced an important new facet to the background of the stormtrooper army: loyalty to the First Order. Although the Galactic Empire of the original trilogy dabbled in fascist imagery, it didn’t have an overt political ideology or strategy like the villains in the Hunger Games movies.

Darth Sidious, aka Emperor Palpatine, was driven by an unquenchable thirst for power; his officers were motivated by a combination of fear and military professionalism; and his stormtroopers were mostly depicted as brainless cannon fodder. The First Order is subtly different, and there are strong hints that stormtroopers spend years being brainwashed so they’ll be willing to die for their cause.

Oddly enough, this idea helped to humanize the stormtroopers. Finn is obviously an outlier, but we also saw several other moments that set certain stormtroopers apart from their comrades. In one scene, two guards tacitly agree to run away from Kylo Ren‘s temper tantrum, and during one battle sequence, an amped-up soldier attacks Finn with a riot-control baton while calling him a “traitor.” That isn’t the kind of reaction we saw from the personality-free drones of A New Hope.

Based on Finn’s backstory and General Hux’s Nuremberg-style rally on Starkiller Base, we know that the First Order’s entire infrastructure is built on a foundation of loyalty and brainwashing. It’s a militarized cult on an industrial scale.

Stormtroopers are conditioned from childhood to kill for the Order, rejecting all sense of personal identity in favor of masks and serial numbers. Aside from Finn, we never see a stormtrooper’s face. Individuality seems to be a perk of higher office, with Hux and his lieutenants getting real names and traditional military titles. Captain Phasma is an interesting middle ground: still a stormtrooper, but one who has a clear sense of identity and whose job involves monitoring the manufactured loyalty of her subordinates.

Phasma’s role suggests an atmosphere of constant surveillance, in which soldiers are encouraged to inform on potential traitors among their comrades. This cult-like regime may well have been inspired by North Korea, which receives a fairly obvious nod in the form of Snoke’s official title: Supreme Leader. The intriguing (and heartbreaking) thing about Finn is how normal he is. Despite a lifetime of training and brainwashing, he defects at the first sign of violence, mourning a fallen comrade and refusing to participate in the murder of civilians on Jakku. This level of empathy clearly isn’t a desirable trait in a stormtrooper, but Phasma’s reaction to his defection—observing that she never noticed any serious anomalies in him before—implies that the average stormtrooper may well be more human than we think.

In Greg Rucka’s short-story collection Before the Awakening, Finn’s training sounds surprisingly similar to that of a typical military unit. Some stormtroopers even have nicknames based on their serial numbers, and in spite of their unquestioning loyalty to the Order, they are capable of kicking back and having casual conversations. If the stormtroopers truly were seen as completely disposable cannon fodder, Finn wouldn’t have been branded a traitor (a very loaded word) by his comrades. He simply would have been written off as a malfunctioning piece of equipment. The First Order’s backstory doesn’t get much screentime in The Force Awakens, but the film’s visual dictionary offers some background on how the Order emerged from the ruins of the Empire. Most importantly, the officer class all grew up “on the far side of the Unknown Regions,” isolated from the New Republic founded by Leia and the rebel forces.

Characters like General Hux spent 30 years absorbing propaganda about terrorists (the Rebel Alliance) destroying the glory of the Empire, which explains why Hux and his contemporaries display such zeal for the Order. They’re the political equivalent of Kylo Ren’s obsessive Darth Vader cosplay antics.

Because the First Order evolved from the methods of the Empire, its leaders needed a stormtrooper army to match: efficient, deadly, and loyal to the cause. They wanted to inspire the same passionate devotion that made the Rebel Alliance so powerful, but in order to do so, they had to take a shortcut. That shortcut was building a brainwashed cult, big enough to take over the galaxy.