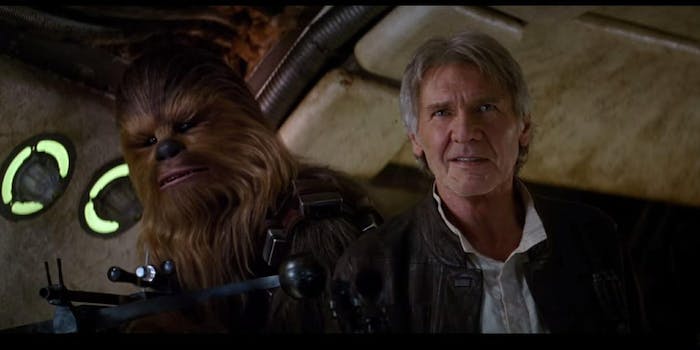 Fans already think ‘Star Wars: The Force Awakens’ is the best film in the series

How hyped are Star Wars fans for The Force Awakens? Most of them already think it will be the best film in the series.

Variety reported on Tuesday that Harris Interactive conducted a survey in mid-September to gauge the fan response to the new film, and the results are in. Aside from the general feelings toward the new film, the survey also asked about expectations for the movie and its merchandise alike. Of the 2,031 U.S. adults polled, almost two-thirds of them are hyped enough to say the seventh installment will prove the best because of visual effects, plot, and cast. Interestingly enough, it also found that more than half would take “unusual measures” to get their hands on highly demanded merchandise. And by “unusual,” the poll found that this includes lying and tripping elderly folks.

While hype for the film is high, the fans are attributing it to the technical and creative aspects more than director J.J. Abrams. The Force Awakens is the first Star Wars movie to be directed by Abrams, and only 15 percent of the fans surveyed stand behind him as a source of excitement.

Instead, fans are building their high hopes off other aspects such as CGI. The survey found that 36 percent expect the visual effects to drive the film’s success in the franchise because they will have “more advanced CGI” than the other six movies. Twenty-five percent claim The Force Awakens will make a “more interesting story” than the others, while another 25 percent think this flick will be “more true to the Star Wars series.” The remaining 14 percent of fans polled credit their excitement to a “better cast,” which includes legendary members Harrison Ford, Carrie Fisher, and Mark Hamill, as well as new members like Daisy Ridley and John Boyega.

Branching off from the actual film itself, the survey gathered responses about related merchandise. At 69 percent, nearly three-quarters of the fans polled agree that retail shelves will be cleared of related Star Wars merchandise pre-premiere. With such a high demand for these toys, 55 percent of fans expressed just how far they would be willing to go to snag some for themselves.

Of that 55 percent, a total of 19 percent of fans responded they would dress up as characters from the franchise to acquire merch. While that’s relatively tame, the remaining 36 percent had more radical means. At 12 percent each, fans commented that they would either cut in line or lie to fellow customers about merchandise to gain an upper hand. At the most drastic level, 7 percent admitted to tripping the elderly to get ahead, while 5 percent would whip out their acting skills and fake a panic attack.

According to a survey conducted by California-based Piedmont Media Research, The Force Awakens is the second most anticipated film for fall (trailing just behind The Hunger Games: Mockingjay, Part 2). With such high expectations, it’s no surprise to see the lengths fans will go. Star Wars: The Force Awakens is set to premiere on Dec. 18 in the U.S., so we’ll see how it fares among fans then.