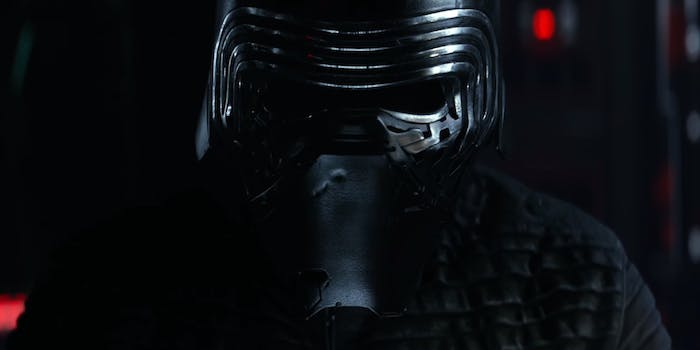 Disney nearly broke the Internet Monday night when it released the long-awaited full trailer for Star Wars: The Force Awakens, which is now less than two months away.

The trailer, which aired on Disney-owned ESPN during the New York Giants–Philadelphia Eagles game, showed new footage of Rey (Daisy Ridley) on the desert planet Jakku, ex-stormtrooper Finn (John Boyega) crashing his TIE fighter on Jakku, and the two of them later aboard the Millennium Falcon with Han Solo. It also showed masked villain Kylo Ren (Adam Driver) saying, “I will finish what you started,” as the camera zoomed in on the burnt helmet of Darth Vader. Ren and Finn are also shown in a lightsaber duel.

“There are stories about what happened,” Rey says to Han on the Falcon.

Earlier on Monday night, tickets for the film went on sale, and almost immediately, sites like Fandango and MovieTickets crashed under an immense traffic load.

This is Fandango right now. This does not happen with other movies. #StarWars #TheForceAwakens pic.twitter.com/fVQDC5qa1Y

Shortly before the trailer aired, director J.J. Abrams shared a note on the Twitter account of his production company, Bad Robot, saying that he hoped fans enjoyed the new look at the film.

On Sunday, Disney primed the world for the trailer by releasing the film’s official poster.

The trailer follows two tantalizing teasers, one released as a Thanksgiving present on Nov. 28 and the other released at Star Wars Celebration on April 16. The first teaser sent Disney’s stock to an all-time high. The second teaser became the Guinness World Records-certified most-viewed movie trailer on YouTube in 24 hours, garnering nearly 31 million views in one day.