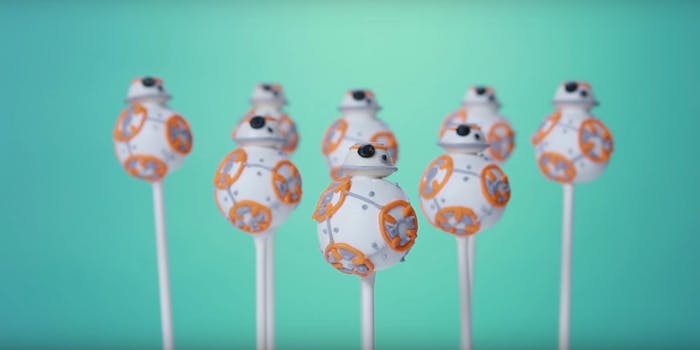 The droid will be ready to eat in no time.

BB-8, the breakout star of Star Wars: The Force Awakens, has already been part of plenty of merchandise (some that hasn’t been created yet), but this BB-8 cake-pop recipe just might inspire the budding chefs in all of us after our latest trip to the movie theater.

Rosanna Pansino, the host of the geek-based cooking show Nerdy Nummies, has her own BB-8 on hand as she modifies her orange pound-cake recipe to create BB-8 cake pops. The lovable little droid is quite useless as a baking assistant, but the recipe is fairly easy for potential bakers to recreate. After baking the pound cake, it’s a matter of breaking it apart, mixing it in frosting, and creating that ball shape to decorate.

And soon enough, you’ll be surrounded by mini-cake droids.

Never has something looked so cute and irresistable.