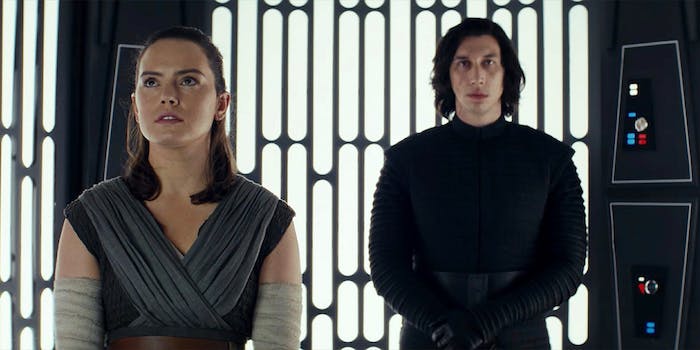 We now know the title of ‘Star Wars: Episode IX’

The end of the Skywalker Saga has a name.

Lucasfilm is notoriously tight-lipped about upcoming projects, so just about any nugget of information it drops gives fans plenty to speculate about. And with the final film in the Skywalker Saga—the name for the main Star Wars films that center around the Skywalker family—arriving at the end of 2019, we now know what to call one of the most anticipated films of the year.

The title of Episode IX is Star Wars: The Rise of Skywalker, the film’s first teaser trailer revealed at Star Wars Celebration in Chicago during the film’s highly anticipated panel.

Every generation has a legend. Watch the brand-new teaser for Star Wars: #EpisodeIX. pic.twitter.com/fWMS13ekdZ

The Force Awakens and The Last Jedi both gave way to plenty of interpretation (not to mention memes), and as fans digest the new title for The Rise of Skywalker, it will likely lead to similar discussion.

So far, the films themselves confirmed (and reaffirmed) that the sequel trilogy is largely Rey’s story, but The Rise of Skywalker nods to the legends that came before it. While there will be plenty more Star Wars for the foreseeable future between TV shows like Star Wars Resistance, The Mandalorian, Diego Luna’s Cassian Andor series, and the Star Wars: The Clone Wars revival and films in the works from Rian Johnson and Game of Thrones showrunners David Benioff and D.B. Weiss, The Rise of Skywalker will undoubtedly mark the end of an era in the Star Wars universe.

Fans have been anticipating the title as far back as the end of January when cast members such as Anthony Daniels (C-3PO) first started to announce that they had wrapped filming on the film.

Star Wars: The Rise of Skywalker will arrive in theaters Dec. 20.