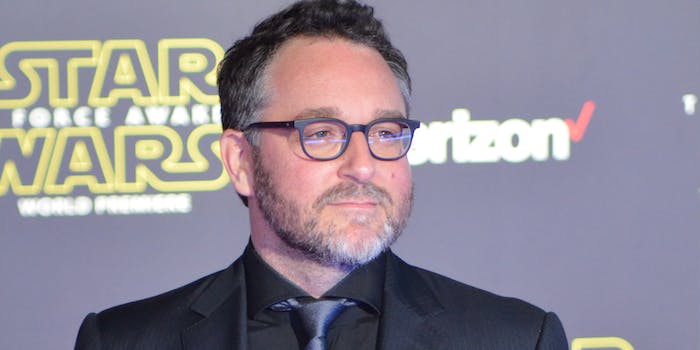 is getting an unexpected rewrite. According to the Hollywood Reporter, Disney has hired Jack Thorne (Harry Potter and the Cursed Child) to rewrite the script from director Colin Trevorrow and his writing partner Derek Connolly.

Trevorrow was hired to direct Episode IX in 2015, and he hasn’t earned the same rapturous welcome as The Last Jedi writer/director Rian Johnson. His Hollywood track record makes him the archetypal example of inexperienced white men who end up directing massive franchise movies.

After making the low-budget indie drama Safety Not Guaranteed in 2012, Trevorrow was recruited to direct and co-write Jurassic World. Then this year, his third movie, The Book of Henry, was panned by critics. Responses ranged from disbelief to outright mockery, with many reviews highlighting the film’s wildly uneven tone, and expressing concern about Trevorrow’s involvement in Star Wars.

THR doesn’t have much information about Episode IX’s rewrites, but Disney still has time to fix any potential problems. Unlike Han Solo, which swapped directors toward the end of production, Episode IX won’t start filming until 2018. It’s also worth remembering that Episode IX faces a major setback beyond the vague concerns about Trevorrow’s input. Carrie Fisher‘s death had a huge impact on plans for the movie, which would have involved Leia in a central role. This required the Lucasfilm Story Group to rethink their plans for the trilogy’s conclusion, and this may explain why Trevorrow and Connolly needed outside help.

New screenwriter Jack Thorne is a rising star, known primarily for his theater and TV work in the UK. He’s currently attached to the BBC adaptation of Philip Pullman’s His Dark Materials trilogy, and he already has a distant connection to the Star Wars franchise: he wrote an adaptation of the German play Woyzeck this year, which starred John Boyega at London’s Old Vic theater.