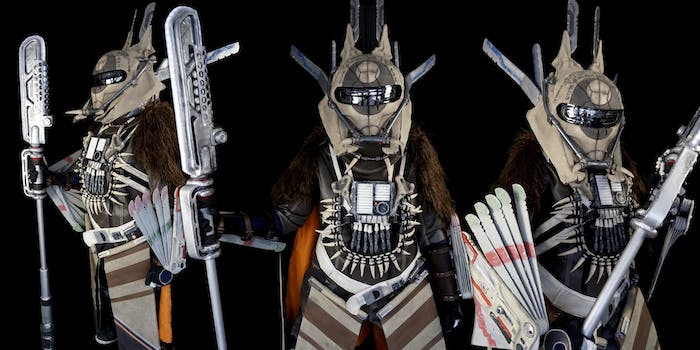 It includes light-up weapons, a handmade replica helmet, and a working voicebox.

Solo: A Star Wars Story’s Enfys Nest is a great example of how costuming plays a vital role in Star Wars. Like Boba Fett, Darth Maul, and Captain Phasma, she arrived on-screen as an enigmatic figure with an irresistibly cool aesthetic. She caught our attention before we knew anything about her motives or backstory, and once we discovered her role as a secret rebel, you could spot a ton of symbolic detail hidden in her costume.

That level of detail also makes her much harder to cosplay than, say, Rey or Finn. To get the authentic look, you need to build her costume and accessories from scratch—which is exactly what cosplayer Michaela decided to do. Documented in a series of DIY videos, she just completed an astoundingly accurate version of Enfys Nest’s costume.

Alongisde the technical intricacy of recreating Nest’s helmet or weapons, cosplayers have to contend with the uniqueness of the costume as a whole. In the supplementary materials for the movie, we learn that Nest designed her outfit to disguise her identity, featuring components from a variety of alien planets. It’s not something you can put together by easily modifying regular clothes.

In an email to the Daily Dot, Michaela said she fell in love with Nest’s costume “months before the movie actually came out.” After watching Solo, she decided to make one for herself, offering a new challenge after other cosplay projects like Star Wars Rebels’ Sabine Wren.

The finished costume includes a light-up electroripper staff, vambraces that open and close (that’s the fan of grey armor on her arms), and a chest box with a functional voice changer like Nest’s vocal disguise in the movie.

According to Michaela, the most complicated aspect was the helmet, which took half the overall construction time. “The design was complicated enough to reproduce without having to take into account weight, visibility, air circulation and transportation,” she explained. It’s the most distinctive part of Nest’s look, decorated with a stylized eclipse (symbolizing light in a dark place), and a handwritten quote: “Until we reach the last edge, the last opening, the last star, and can go no higher.”

However, Michaela is also proud of a more obscure detail: Enfys Nest’s shoes. Apparently, the movie version involved a pair of $600 boots cut down to size, but Michaela modified a pair of Nike high-tops for a tenth of the price. Yes, the rebel hero of Solo: A Star Wars Story wears Nikes.

You can find more photos of Michaela’s cosplay at her website, Studio of M.M., or on her YouTube series about making the costume, where she recommends the episode about building Nest’s helmet.