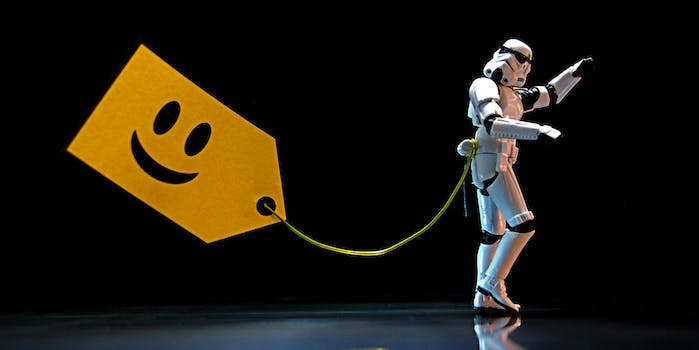 A guide to ‘Star Wars’ emoticons

These are the Star Wars emoticons you're looking for.

Kids these days are all about the emoticons. But before Apple incorporated an emoticon palette directly into its mobile and desktop operating systems, people who were too lazy to type out real words used plain-text ASCII emoticons to convey messages. In an attempt to revive the format, we’ve compiled several of the best ASCII emoticons from a theme that’s about to get a lot more relevant: Star Wars.

With Episode VII coming out next December, you’re probably going to start hearing more about Star Wars whether or not you’re a fan of the franchise. You may even start to receive texts with cryptic symbols like [-o-] from the Star Wars nerds in your life. So, we created a guide to the world of Star Wars ASCII emoticons.

This is a B-wing, one of the types of Rebel fighters that attack the second Death Star in Return of the Jedi.

This is a side view of the Tantive IV, the ship that the Imperial Star Destroyer Devastator intercepts while it’s carrying Princess Leia in A New Hope.

This is what the fighter pilots of Red Squadron saw in their rear-view mirrors as they made their final attack run down the Death Star’s equatorial trench in A New Hope. For Biggs Darklighter, these emoticons—well, OK, the ships themselves—would be the last thing he ever saw.

This is a TIE bomber. You may remember them from the scene where they pounded the “cave” where the Millennium Falcon was hiding in The Empire Strikes Back.

This is an X-wing with its S-foils (technical slang for the ship’s adjustable wings) closed.

This is what an X-wing looks like when its S-foils are locked in “attack position,” as seen in this clip from A New Hope:

This is Princess Leia Organa, formerly of the House Organa of Alderaan and subsequently a leader in the Rebel Alliance.

Twitter user @stoogey explains it best: “Yoda looking up, which he does a lot because he is short.” Take, for example, this pivotal scene:

@ericgeller I use this one to signify Alderaan: