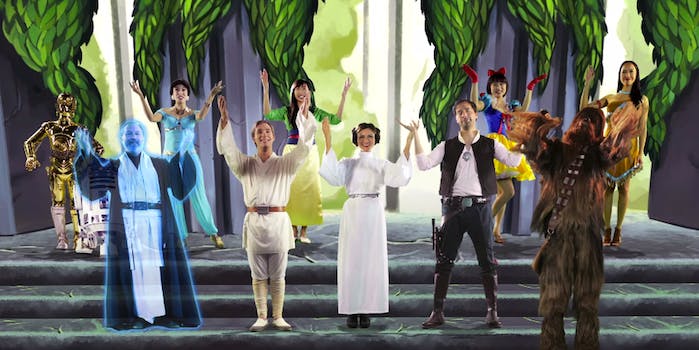 ‘Star Wars Musical’ imagines just how bad the series could get

A long time ago in a galaxy far, far away, there was a show-stopping tune.

A long time ago in a galaxy far, far away, there was a show-stopping tune.

People have been picturing what Star Wars would look like under Disney control ever since it purchased LucasFilm a couple years ago, and this parody of A New Hope from George Shaw is both the best and worst-case scenario that could happen under Disneyfication.

The space opera turns into a more literal opera as everyone gets their song solo moment to shine and Luke Skywalker even gets his own “Want Song” with Obi-Wan Kenobi by his side with just enough hint of the Disney songs (and characters) you grew up singing.

And if you think about it, Star Wars has all the makings of a classic fairy tale: “Far off places, daring sword fights, magic spells, a prince(ss) in disguise!”

It’s a song lyric from Beauty and the Beast, but it could just as easily be Star Wars. And with Shaw promising to make musical versions of The Empire Strikes Back and Return of the Jedi, we fully expect more Disneyfying, just as long as it stays out of the actual movie.