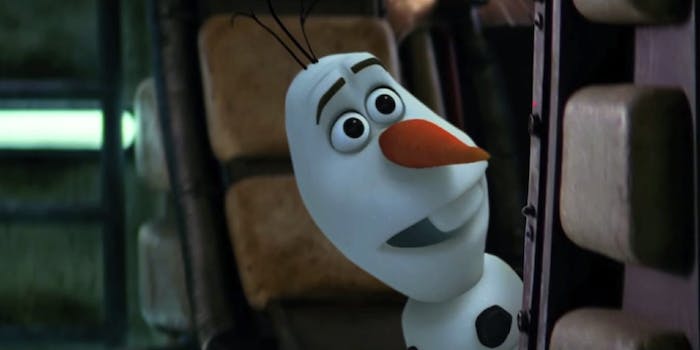 The Force of cross-franchise synergy is strong with these characters.

Star Wars: The Force Awakens is an uncharted galaxy in the Disney universe—a whole new world, if you will.

The Pistol Shrimps, a group of video editors from Norway, seamlessly edited famous animated Disney characters into teaser footage from The Force Awakens, and the results are incredible. Not only does it look like it’s supposed to be that way, but the additions totally work given what we know of the new Star Wars film’s plot.

Agrabah could totally double as Jakku, Maleficent is part of the First Order’s first line of defense, Rey is a total Belle, and there’s even a James Earl Jones cameo with a message to his son. Now, who wants to go on a magic Millennium Falcon ride?

But poor Olaf. He never had a chance with Captain Phasma.