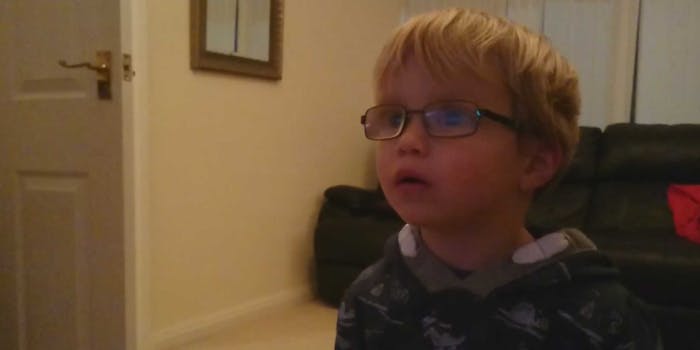 This kid is all of us.

You never forget your first… viewing of Star Wars.

YouTube user Sam B was smart enough to capture his 3-year-old son’s first viewing of 1977’s Star Wars Episode IV: A New Hope on camera. It’s because of him that we’re able to watch a small child describe the film’s opening minutes, including a mention of the “storm woopers.”

The video just gets cuter from there. During the lull in between the iconic studio fanfare and the logo blasting on screen, Sam’s son puts a finger to his lips, hushing his father, ready for what’s about to happen.

When John Williams’ music swells and the logo appears, the young man starts smiling and dancing, a living metaphor for all of us whenever we’re sitting in a movie theater or on our couch watching that unforgettable title sequence.

Sam starts humming the tune, to which his son jauntily replies, “I like it.”

The boy continues to display wide-eyed amazement at the first few minutes of the film. No matter how old you were when you first saw Star Wars, we’re betting your initial reaction was probably some version of what Sam’s son did here.