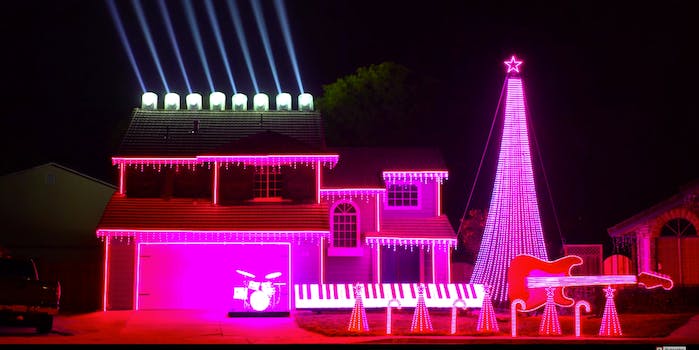 This gigantic display uses over 200,000 lights and multiple lawns.

From days of yore, or maybe just the dawn of the Star Wars Christmas Special, it’s been obvious that Star Wars and the holidays just go together. That’s clearly why Star Wars fan Tom BetGeorge just upgraded his 2014 Star Wars light show from 100,000 lights to 200,000 lights. Because what kind of quitter stops at only 100,000?

BetGeorge actually roped his next-door neighbors into letting him expand this enormous light show onto their lawn. With that kind of devotion to light and sound, you can better believe there’s also an overhead drone fly-by camera shot involved.

I don’t know if this has renewed my appreciation for Star Wars or Christmas, but it has renewed my love for all the neighbors who’ve never asked me to let them expand their Christmas light show into my yard. Thanks, guys. You’re what the light side of the Force is truly about.