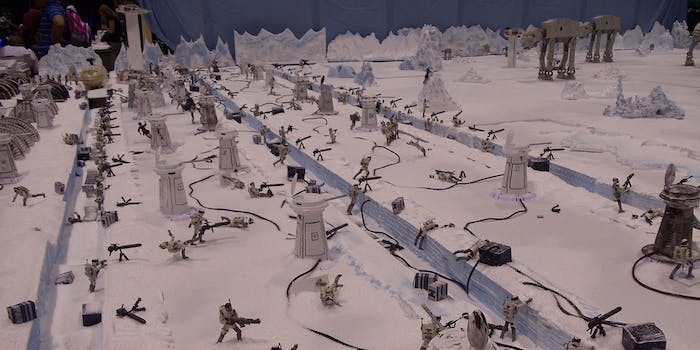 Fans had a lot of questions.

Curious about what raises a Star Wars fans hackles? It’s a laundry list to be sure, but for one particular subset of the fandom, mention canon and continuity and watch the sparks fly.

After the Star Wars Expanded Universe was abolished in August of 2014, Star Wars Legends was established as a way to classify the previous video games and fiction. For a large portion of fans, this was the medium they connected to in order to fully enjoy the franchise. To say they weren’t happy would be an understatement.

The gist behind the panel was simple enough: explore how the Lucasfilm Story Group works with their publishing partners, Del Rey, Marvel, and DK. Featured on the panel were Pablo Hidalgo and Leland Chee from the Lucasfilm Story Group, Michael Siglain and Jennifer Heddie of Lucasfilm, Shelly Shapiro from Del Rey, Sadie Smith of DK, and Jordan D. White and C.B. Cebulski from Marvel.

Conceived initially by Lucasfilm president Kathleen Kennedy, the Lucasfilm Story Group was created to sync the cinematic universe with publishing and other storytelling opportunities like video games. The Journey to Star Wars: The Force Awakens is a full-scale marketing tactic across publishing platforms to drive excitement and sales for the upcoming film. Multiple publishing partners are taking part in The Journey with newly announced Marvel comics, Del Rey releases, and at least 20 different projects spread across publishing. Hints and breadcrumbs will drop throughout the initiative, but Lucasfilm has declined to share what those are. The benefit to working in One Big Story is now the Star Wars experience will be authentic no matter how you’re consuming the franchise.

But back to the belligerent fans. During the Q&A portion of the panel, attendees continued to ask the same question worded differently each time: Why won’t you bring back Star Wars Legends? Where is character X? When will XYZ happen? The panelists handled each question with diplomacy, tact, and charm while managing to restore civility each time the same question was asked.  If asked to sum up the panel with one quote, Lucasfilm’s Pablo Hidalgo takes the cake: “Hutts are no longer hermaphroditic.”