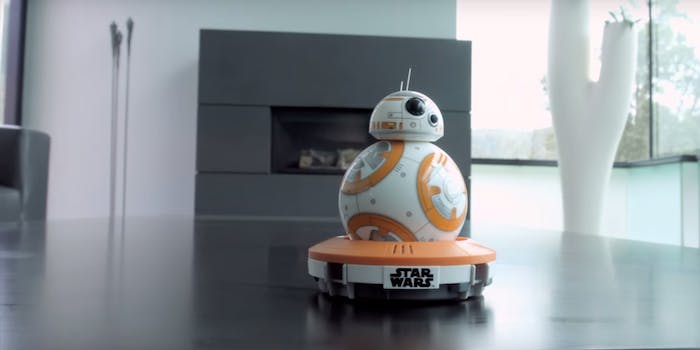 Is this the cutest 'Star Wars' toy of all time? Yes, yes it is.

The most hotly anticipated new Star Wars toy is here—and it looks even more awesome than we were expecting.

As soon as the rolling droid BB-8 appeared in The Force Awakens‘ first trailer, Star Wars fandom fell in love. The spherical little character was something of an engineering mystery at first, but an in-person appearance onstage at Star Wars Celebration in Anaheim proved that BB-8 is the real deal. And as part of the marketing madness in the leadup to Force Friday, Sphero, which built the unit that rolled onstage, unveiled the feature-packed consumer version that you’ll be able to take home,.

Sphero’s BB-8 toy—release date TBD—is an app-controlled robot that can roll around your house, go on “patrol,” send and receive “holographic” videos, and respond to your voice. Oh, and it’s ridiculously adorable.

Just in case you have any lingering doubts about the supreme lovability of BB-8, Vanity Fair put together this video in which it introduced the tiny droid to some puppies. That’s right—puppies and BB-8. Together.

R2-D2 has some serious competition in our hearts.