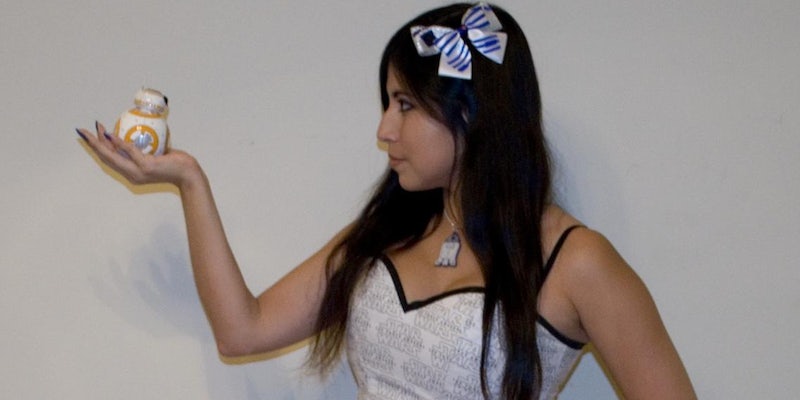 Carolina Huamani knew she had to do something special for the release of Star Wars: The Force Awakens—she had to create a dress that matched the hype.

And did she ever.

At first, Huamani, who has been cosplaying for years, planned a Victorian gown inspired by lovable droid R2-D2. But then, like so many fans, she fell in love with the new robot BB-8. Seeing BB-8 in the trailers and getting her hands on the Sphero toy made Huamani want to include BB-8, too—and the result of these two lovable droids coming together is as awesome and full of the Force as you might expect.

Huamani’s dress transforms from one droid to the other in just a spin—and Star Wars fans have been clamoring to know where they can buy one.

“I wasn’t able to figure out how to get them to share a single dress, so I came up with the idea of having two dresses in one,” Huamani told the Daily Dot in an email interview. “This dress was supposed to be a simpler construction since it’s purely fabric, but having to draft my own pattern and the fact that the skirt part was made out of several dozen panels meant it took a lot longer than originally anticipated.”

Huamani is an electrical and software engineer by day, so her “cosplay and sewing skills are a combination of [being] self-taught and [spending] long hours on the Internet.” She told the Daily Dot that cosplay led her to work with everything from worbla and Arduino boards to regular old needle and thread.

“I’m as likely to be out in the garage with a jigsaw and dremel tool as I am to be inside with the sewing machine,” she said. Needless to say, it wasn’t difficult for her to engineer the dress—it just took a little planning. 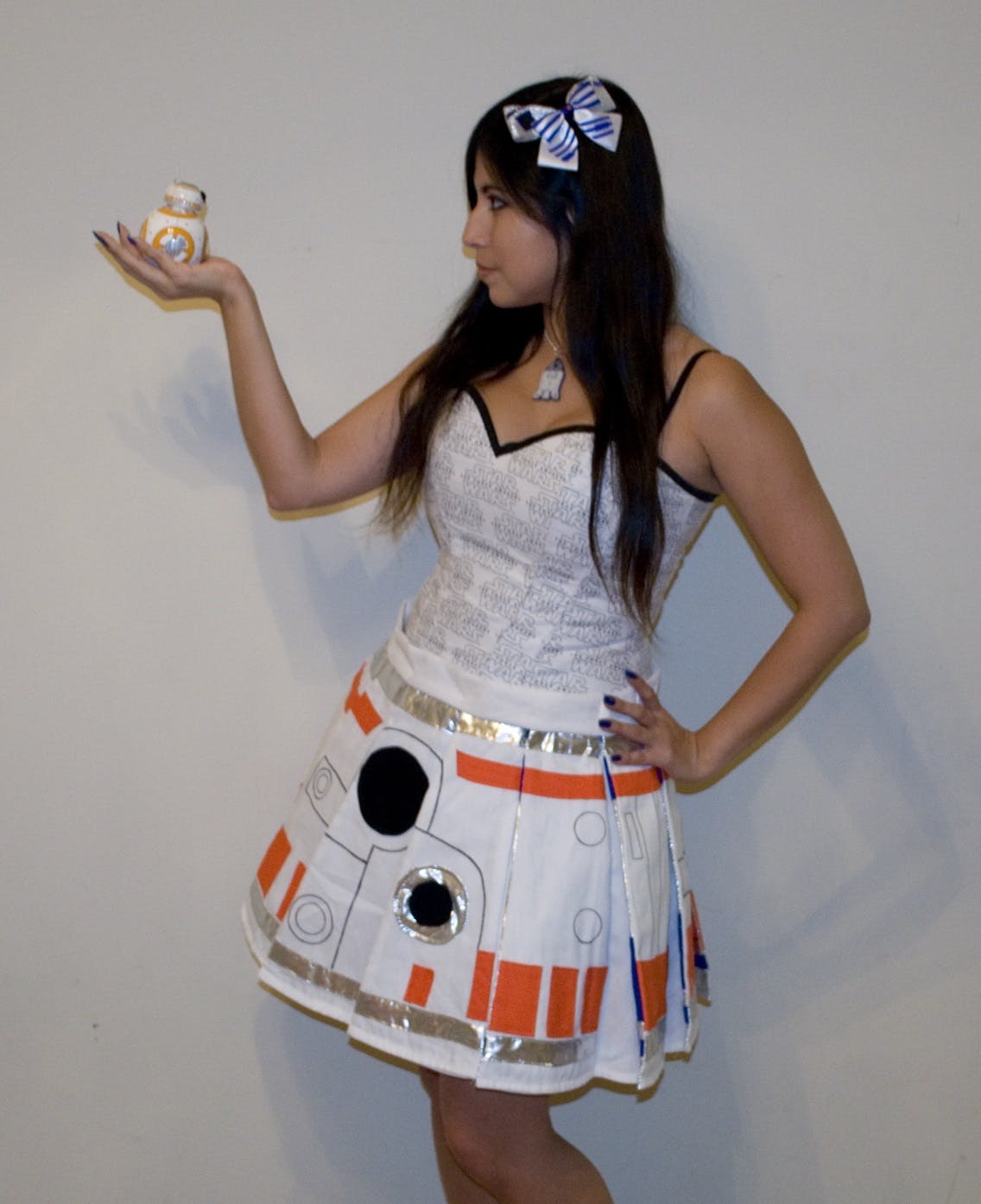 For this design, Huamani said she used Post-it notes to make her first prototypes until she could figure out the switching element. Then she made a paper draft of the pattern and a muslin mock-up.

“Once this full-sized prototype worked, I redrafted the pattern out of paper to figure out the placement for all the accent pieces of R2-D2 and BB-8, using my Sphero BB-8 droid and an R2-D2 popcorn holder for reference.

“All the accents were sewn on individually before I could assemble the overall skirt,” she said. “After that, it was a matter of sewing together the panels and hand stitching on the final details.” 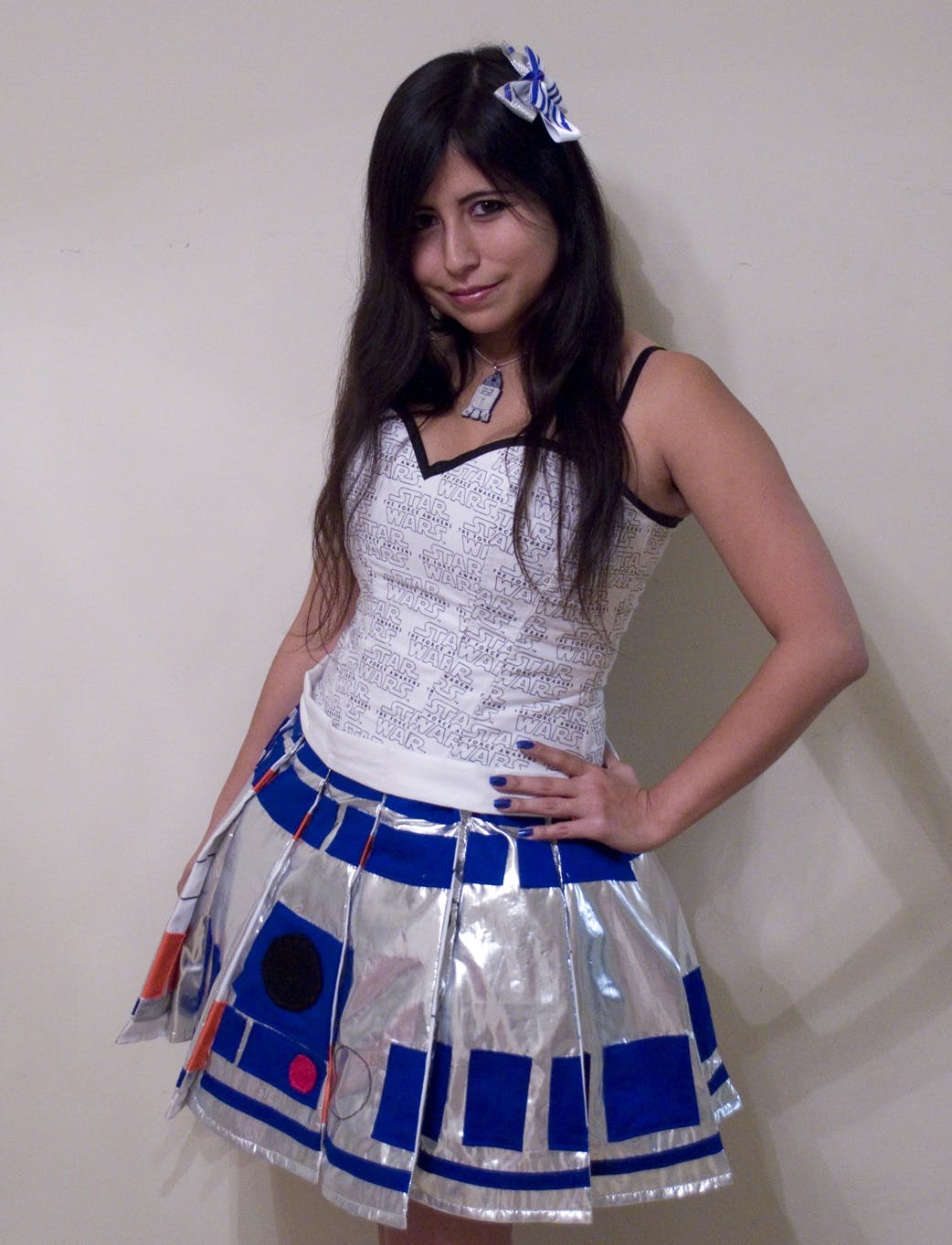 Huamani said that making the dress took about 40 hours.

“Unfortunately, by the time I actually figured out how to do it, there was only about a week and a half left till the premiere,” she said. “Time management has never been my forte, but what I lack in planning, I make up for with an ability to go long periods of time without sleep!”

All of that hard work paid off, though. The final product is a fun, unique Star Wars design that has impressed many fans—as evidence by the top comment on her Reddit post calling her a witch.

“I had never used either Imgur or Reddit before the night I posted the GIF of the dress at a friend’s suggestion, so I had no idea what those sites actually were and definitely no idea that it would grow like it did,” she said. “It’s been a pleasant surprise that my random creation was so well received! It’s been quite an experience.”

On Monday, Huamani shared the GIF of the transforming dress on her cosplay Facebook page, Lemon Drop Cosplay, which she started this year with one of her best friends and fellow cosplayers. Within 24 hours, the post received more than 2,000 shares and more than 1,000 likes.

So how do you get one of these transforming dresses for yourself? While Huamani said she doesn’t have a tutorial to share for recreating the dress, as always when it comes to Star Wars, there is hope.

“I’ve been asked many times since the dress started getting popular to make a tutorial, and I may attempt to do that in the coming months in the con off season,” Huamani said. “I took a two day break after completing the droid dress to catch up on a lot of lost sleep, and now I’m back in full cosplay prep mode for PAX South. I figured out the pattern by playing with Post-it notes and weirdly a bit of trigonometry, so I’m sure someone will figure it out before long. Judging from some of the comments, they’ve gotten fairly close already.”