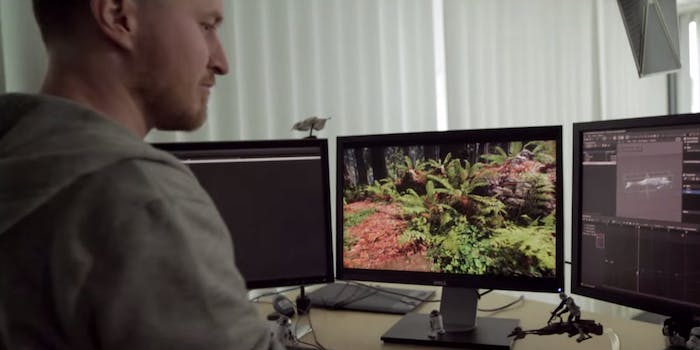 We know very little about the game so far—but that will change very soon.

Electronic Arts‘ next-gen video game Star Wars: Battlefront might be the most highly anticipated Star Wars product aside from the new films. EA recognizes that fans are chomping at the bit to learn more about Battlefront, and in less than a month, it will give fans what they want.

“We could not think of a better or more appropriate place to debut the game officially for the first time than the premier event that celebrates the Star Wars universe and the legions of fans who have fallen in love with it,” EA said in a statement.

EA’s Battlefront is a reboot of the game series, which began in 2004 with Pandemic Studios’ Battlefront and continued with Pandemic’s Battlefront II in 2005. EA announced its title in early 2013, after Disney acquired Lucasfilm, shut down many of the company’s existing video-game projects, and gave the Star Wars console game license to EA.

EA first teased the game, which is being developed by its DICE studio, at the Electronic Entertainment Expo in 2013, then returned to E3 in 2014 with a longer trailer. As you can see below, neither video revealed much about the actual gameplay. Meanwhile, rumors have been flying about the extent to which its story will tie in with that of the new movie, Star Wars: The Force Awakens, which releases on Dec. 18.

EA CFO Blake Jorgensen told investors in January that Battlefront will be “aligned with” The Force Awakens, but the company has kept further details under wraps. It appears that will change in mid-April, when EA takes the wraps off its game in front of tens of thousands of Star Wars fans at the Anaheim Convention Center.