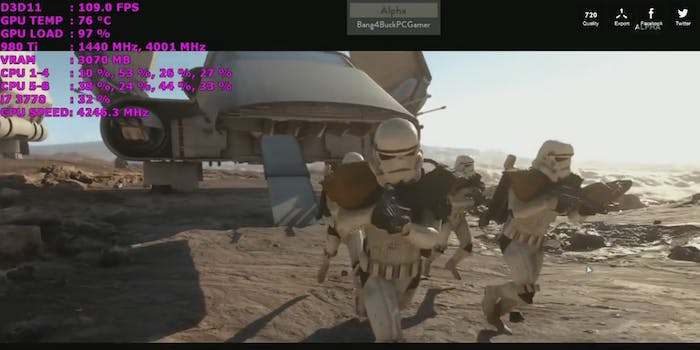 Get a look at the awesomeness we played at E3.

Star Wars Battlefront was a high point of E3 2015, and now you can get a taste of the fun we had.

All Games Beta has shared a series of videos that purport to be footage from the closed alpha test being conducted right now for Star Wars Battlefront. We were not presented with game menus during our E3 playthrough, so we can’t speak to the veracity of that footage. The actual gameplay in the leaked videos, however, looks precisely like what we played at the Expo.

Dailymotion is currently hosting the leaked footage. Our first demo was of Battlefront’s Missions mode, a two-player, co-op, wave-based survival game. Here’s a look at the Tatooine level that pits Rebel troopers against Imperial Stormtroopers, Scout Troopers, and AT-STs.

The next two videos are of the Walker Assault map, a recreation of the Battle of Hoth and the second Battlefront demo we played at E3. Check out how the Rebels can hop into gun turrets along the trench line, and listen to how good those blaster effects are. Also, enjoy a look at an AT-AT that’s too close for comfort.

Eurogamer reports that Electronic Arts, the publisher of Battlefront, is doing everything it can to stop these footage leaks by yanking videos off YouTube and shutting down streams of the alpha test.

In the meantime, enjoy an entire 19-minute match from the Star Wars Battlefront alpha test:

Screengrab via All Games Beta