The new series is out today.

A new retelling of the original Star Wars trilogy debuts today, and you can hear part of the first audiobook right now with our exclusive clip.

The series includes Star Wars: A New Hope, The Princess, the Scoundrel, and the Farm Boy by Alexandra Bracken, Star Wars: The Empire Strikes Back So You Want to Be a Jedi? by Adam Gidwitz, and Star Wars: Return of the Jedi Beware the Power of the Dark Side! by Tom Angleberger. The books were announced in June and offer new interpretations of the films aimed at young audiences between grades 3–7. 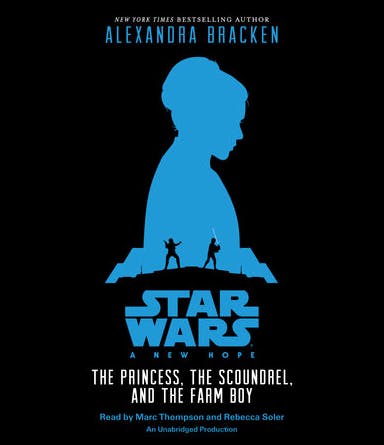 Here’s the description for the trilogy’s first book Star Wars: A New Hope, The Princess, the Scoundrel, and the Farm Boy from Penguin Random House Audio:

“The galaxy is at war. Although the Rebel Alliance has won a few battles against the Empire, hope is fading. The Empire is about to finish building the greatest weapon the galaxy has ever seen—the Death Star. The rebels’ only chance to defeat it now lies in the unlikely hands of a princess, a scoundrel, and a farm boy…Acclaimed, New York Times bestselling author Alexandra Bracken delivers a captivating retelling of Star Wars: A New Hope that brings new life to the story. Since the premier of the original film, Princess Leia, Han Solo, and Luke Skywalker have become iconic, larger-than-life characters. THE PRINCESS, THE SCOUNDREL, AND THE FARM BOY takes a deeper look at these three heroes as they join forces to defeat the evil that threatens their entire galaxy.”

Listen to an exclusive clip from the audiobook published by the children’s division of Penguin Random House Audio, Listening Library, below.