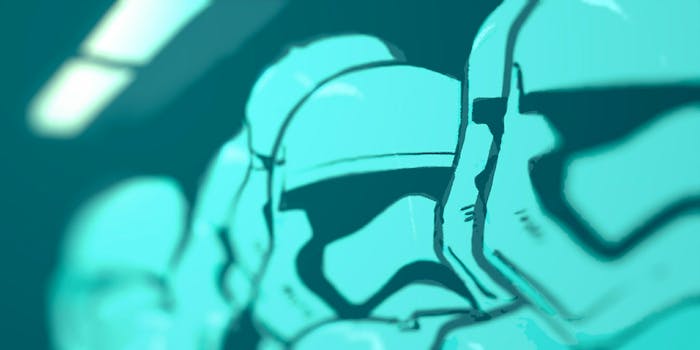 Turn up the Force.

You’ve only got 17 days left until The Force Awakens, and you’re down to the wire in terms of keeping the anticipation high. Why not kick back and let the creative curations over at 8tracks be your soundtrack for the final days of your wait?

Star Wars fans on the popular mix-tape community have already put together hundreds of fan mixes ranging from tributes to Vader to stories from the Extended Universe. We’ve wandered through the galaxy to bring you our favorites.

Though certain eye-catching mixes like What Darth Vader Jams To (Part I and II) get most of the love from Star Wars fans, we’ve gone the extra mile to divvy our choices into the light and dark sides of the Force. We understand that some of you might be a little bit evil, and you deserve to have music to complement the darkness in your soul, while others need rousing Jedi anthems to keep fighting the good fight.

He’s No Good To Me Dead: A Boba Fett Fanmix

No character embodies moral ambiguity like the greatest mercenary in the galaxy, and there’s something irresistible about combining the Fett with Fall Out Boy and the Black Keys’ “Baddest Man Alive.” This whole mix is perfect.

When your colony of criminals needs to kick back and jam, nothing says “wretched hive of scum and villainy” like 8-bit Nintendo theme songs. Trust us.

This homage to the Clone Troopers kicks off with Metallica and doesn’t stop—just the way we like our epic intergalactic battles.

This mix perfectly marries the best and whiniest of late ’90s emo rock with a heavy dose of irony, and we’ve yet to find anything that better encapsulates the facepalmy wonder that is Anakin Skywalker.

The Light Chases the Dark

This playlist earns its way on our roundup by virtue of chronicling the entirety of Anakin’s descent into darkness, along with the Clone Wars. With a whopping 38 tracks, you can skip rewatching Episodes I-III and hit this up instead.  Then follow it up with this mix’s optimistic twin, Out of the Dark, another giant playlist chronicling the love between Anakin and Padme.

Another clone trooper-inspired playlist, this one is for the current pop lover who’s also an indoctrinated tool of the Republic. Perfect for your monotonous commute to the office.

This mix speaks for itself: “you could consider it a mix of songs that this fucking douchebag has on his ipod.” Sign us up.

The Empire or us

This mix is for every would-be rebel pilot who’s ever wanted to fly in the Rogue Squadron, and it’ll make you feel like you’re sitting in a cockpit firing on a couple of wraith fighters.

a jedi walks into a club

Ain’t no party like a ragtag rebellion defeating the Empire, and this club mix will have you celebrating in true Jedi style.

This transcendent mix of medieval and modern choral music will put you right in the middle of a new age Zen state and probably render you capable of using the Force.

The Songbird of Dathomir

This playlist is a tribute to the unsung planets in the far reaches of the galaxy, like tiny Dathomir, home to matriarchal clans of Force-sensitive women known as the Witches. As a bonus, check out this gorgeous photoset inspired by this playlist.

Despite going for the over-literal and including the K-pop tune “Lightsaber” from Exo, this is still a mellow playlist that vibrates with energy, much like a lightsaber itself.

Nothing for me here—a Luke Skywalker Fanmix

This mix had us at John Denver’s “Thank God I’m a Country Boy,” and then like Luke it kept delivering the goods. Unexpectedly, it may be our favorite of the bunch—just like Luke.

Described by the creator as “a journey inspired by Yoda’s homeworld, Yoda passing on his wisdom to Luke, and Luke confronting his greatest demons as he learns what it means to be a Jedi,” this mix blends new age ambience with trance, pop, folk, and other genres to deliver the quirky but pleasant atmosphere of Yoda’s planet.

need an empire to overthrow

This cheeky girl-powered mix is a tribute to Han and Leia, and perfectly captures their roguish romance from start to finish.

If you liked Darth Wheezy, this mix makes the perfect follow-up with a mix of humor and Skywalker-infused ’80s power anthem.