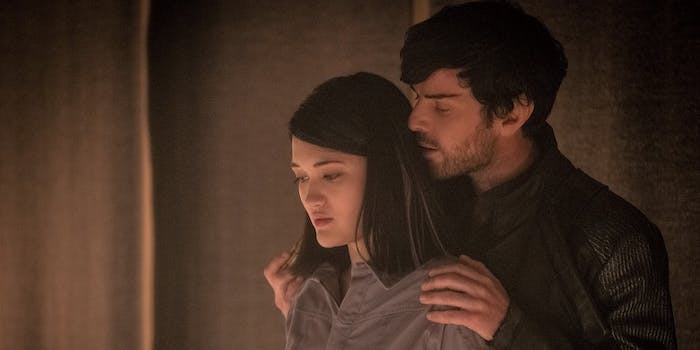 The show's two main storylines come to a head in a dramatic showdown on the Borg Cube.

At last, our two main storylines collide, with La Sirena traveling to the reclaimed Borg Cube in Romulan space, hoping to find Soji before it’s too late. Raffi—now much the worse for wear after a tense reunion with her estranged son last week—uses her remaining Starfleet contacts to get a diplomatic pass onto the Cube. But she can only get one pass, and that leaves Picard to beam down alone, stirring traumatic memories of his time in the Borg Collective.

“They don’t change, they metastasize,” he says bitterly, when Jurati points out that the Artifact’s disconnected Borgs may be different from those he encountered before. In a word, he’s terrified. That fear manifests as a hallucinatory flashback when he first beams down, stumbling through the creepy walkways of the most Borg-y section of the Cube. It’s another fantastic episode for Patrick Stewart, digging into Picard’s trauma and newfound emotional volatility. Unable to hide his anxiety, he hunches and curls into himself during those first few minutes on the Cube, forcing himself to confront his fears for Soji’s sake. His arrival is a blast from the past, harking back to the genuinely spooky, zombie-like origins of the earliest Borg episodes. But soon enough he’s greeted by a friendly face: Hugh.

Of all the returning characters we’ve seen so far, Hugh is my favorite. (Seven of Nine is obviously a close second, but last week’s episode just wasn’t enough time to explore where her life has gone since Voyager.) During his brief stint as a recently-rescued Borg drone in TNG, Hugh was, well… sweet. He had an outsized impact for the same reasons people love Sebastian Stan as Marvel’s Winter Soldier: Even after being brainwashed into a mindless killing machine, his inherent vulnerability shone through. In recent interviews, actor Jonathan Del Arco said he based his original 1992 performance on a former boyfriend who died of AIDS and had dementia: “That was the voice I heard. It was the innocence.” Hugh was completely at the mercy of the Enterprise crew when he first came aboard, and he regained his humanity thanks to Geordi’s friendship. Now he’s repaying that kindness to other ex-Borgs.

TNG and Voyager both featured plenty of Borg episodes, but for a lot of fans, the most memorable storylines are Seven of Nine’s introduction, Picard’s transformation into Locutus of Borg… and this one standalone episode starring Hugh, a character no one expected to return for a key role 30 years later. He taught us (and the Enterprise crew) that while the Borg Collective is a deadly threat, its drones are victims rather than villains. Nowadays, Hugh is essentially a civil rights advocate for ex-Borgs. Episode 3 reintroduced him as a mentor figure to Soji, but this week, Picard points out something I didn’t consider before: Remaining on the Artifact must be very hard for Hugh, for the same reasons it’s hard for Picard.

We already knew that Hugh has a cynical view of the Romulans’ motives for “reclaiming” the Cube, but on top of that, he’s living in a place that brings back years of traumatic memories. This episode also made it clear that he doesn’t have to be here. Hugh has Federation citizenship, and while he’s visibly an ex-Borg, his implants and injuries are far less extreme than some of the other XBs. He’s perfectly capable of functioning in Federation society. But instead of running off to a well-earned retirement, he uses his privilege to help other XBs recover, working under difficult conditions while fully aware that most of the galaxy doesn’t care if these people live or die. Hugh is perhaps the most optimistic, humanitarian, old-school Star Trek hero in the show, and it’s lovely to see this episode a) lay that out in obvious terms, and b) give him and Picard a satisfyingly warm reunion. Hugh would definitely like Picard to use his personal clout to help the XB cause, but it’s not portrayed as an ulterior motive. He’s just happy to see Picard again, willingly dropping everything to help find Soji when she goes missing on the Cube. Which is just as well, because Soji is now in serious trouble.

The episode’s title refers to a kind of Rubix Cube puzzle-box that Narek uses as a metaphor for his methods as a spy. Unlike his violent and impatient sister Narissa—the Cersei Lannister of the family—he prefers to use more finesse. After seducing Soji, he hopes to plumb her subconscious without triggering her synthetic defense mechanisms. That means giving her some of the relevant information to figure out something’s wrong with her memories, without actually telling her that she’s a robot.

Soji has been having a recurring dream about her “father,” a figure who may represent Bruce Maddox, but from her perspective is a false memory creating the illusion of a real childhood. Likewise, her mother is a simple simulation who only appears during video calls. After Narek helpfully informs her that every call to Mom lasts exactly 70 seconds, Soji tests it out. Like clockwork, she has a brief conversation with her “mother” before falling unconscious at her desk. This trigger mechanism is designed to keep her AI thought processes in check, but this time Soji was actually aware of it happening. Rifling desperately through all her possessions, Soji scans all her childhood photos to discover that every single item was created 37 months ago. Her whole life is a lie, but fortunately her supportive boyfriend Narek is here to help. What a great guy!

As I mentioned before, this whole set-up works because the show’s creators understand how to make Narek convincingly sexy and appealing, even though he’s seducing Soji under false pretenses. His more obvious manipulations work because Soji is young, naive, and isolated, but she’s not actually an idiot. She already figured out that he’s a spy, and his subterfuge intentionally relies on a mix of truth and lies. When she accepts his help this week, it’s not because she completely trusts him; it’s because he backed her into a corner where he’s the only option. He’s created a situation where she wants to uncover the hidden memories he needs to find, and she’s desperate enough to ask him for help in finding them.

To do so, Narek introduces her to a Romulan meditation practice called Zhal Makh. In a shielded room full of ceremonial lanterns, he leads her along a path through her subconscious mind, forcing her to confront that recurring dream of her father. Rather than tending to his crop of orchids, she sees him dissecting her own doll-like body. She doesn’t actually understand what this means yet, but that doesn’t matter. All Narek wants is to find the location of her childhood “home,” where his organization, the Zhat Vash, plans to find and destroy any trace of synthetic life. Once she looks up into the sky of her dream and identifies two red moons, Narek instantly betrays her, locking her in the meditation room. As deadly radiation spreads from the puzzle-box he left inside, he’s sad enough to tear up at his girlfriend’s impending death (“You’re not real,” he says, partly to reassure himself, I suspect), but not sad enough to actually spare her life. However, he doesn’t take her synthetic strength into account. In desperation, Soji smashes her way through the floor until she pops up on the Cube’s sensors again, allowing Picard and Hugh to find her.

For Soji, it’s a very confusing rescue. She has no idea what’s happening to her, what Narek just did, or why Picard is here. It’s a testament to Picard’s inherent trustworthiness that she goes with him at all, fleeing to a secret Borg chamber where Hugh reveals an extremely deep cut from Voyager: a teleportation device called a “trajector,” with a massive range of 40,000 lightyears. Picard uses it to transport Soji to a place called Nepenthe (the Greek mythological drug of forgetfulness), where they’ll meet up with the rest of La Sirena’s crew. Romulan soldiers are hot on their heels, and Hugh only escapes because Elnor snuck onto the Cube to protect Picard.

Like last week, this episode suffers from Not Enough Elnor. I’m not under any illusion that Evan Evagora is the most dynamic performer in the cast, but does that matter? Hell no. Elnor’s entire purpose is to be a sweet cinnamon roll who doesn’t really understand what’s going on at any given time, but will viciously assassinate anyone who gets in Picard’s way. Also, he has great hair. He’s a refreshing antidote to the show’s intense tone, but it seems like he may be left behind while everyone else jets off to Nepenthe next week.