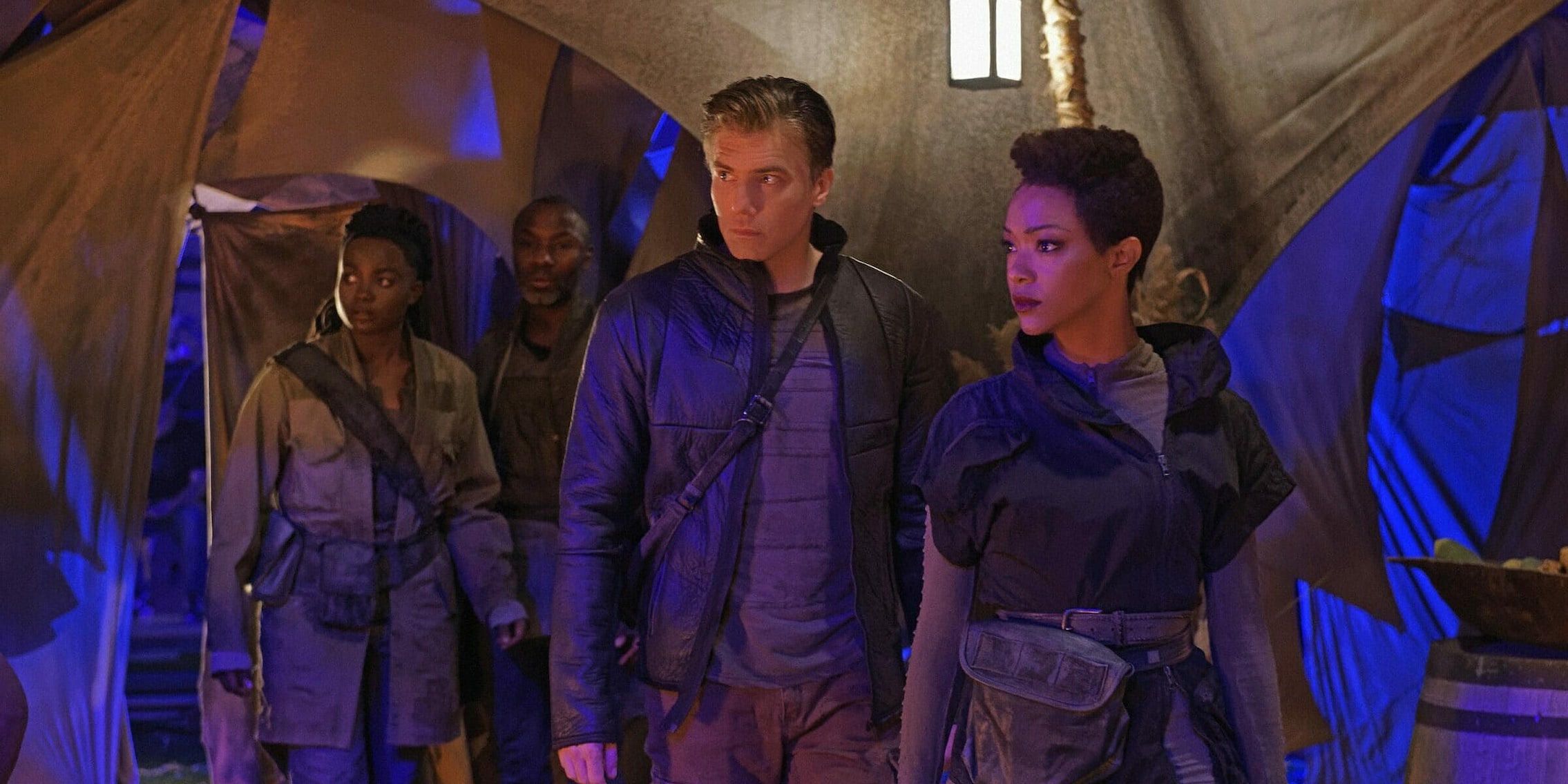 ‘Star Trek: Discovery’ explores the line between science and religion in ‘New Eden’

Star Trek: Discovery’s earnestly upbeat atmosphere is here to stay, continuing with a good old-fashioned “visiting a pre-warp civilization” episode this week. Tracking another of those mysterious red energy signals to the Beta Quadrant, the U.S.S. Discovery finds a settlement of human survivors from World War III. The question is, how did they get there? Humans didn’t have warp travel 200 years ago, and at the speed of a normal starship, it would take over a century to reach this planet.

When Pike, Burnham and Lt. Owosekun (Oyin Oladejo) beam down to the planet, they find themselves in what looks like a Christian church, redecorated with symbols from numerous Earth faiths. On the pulpit lies a holy book with an ominous message: “Those who live by the old ways burn.” Fortunately, our landing party is disguised as locals, protecting them from potential backlash as outsiders.

In the 200 years since they left Earth, these human settlers have built a religion based around the idea that their ancestors were rescued by a Red Angel—much like the one Burnham saw in the season premiere. In previous Star Trek series, the overwhelmingly Christian imagery might be attributed to creative laziness, thoughtlessly assuming that Christian-inspired churches are a culturally neutral concept. In this case, we have a more solid explanation: The Red Angel transported a literal church full of people to this planet, meaning that most of the survivors were probably Christian. 200 years later, they retain certain trappings of Christian ritual and design, combined with elements from other religions.

Pike and Burnham confront this idea in different ways. Raised by Vulcan rationalists, Burnham has zero belief in the supernatural. Meanwhile, Pike is more spiritually flexible, perhaps because his father taught comparative religion. He’s also more attached to General Order One (aka the Prime Directive), leading to a classic Star Trek conflict: Should Starfleet break the rules and use their technology to help a pre-warp civilization? This becomes more urgent when Pike gets injured and they have to beam back to Discovery, accidentally exposing their tech to the settlers. A local skeptic rightly interprets it as proof that they came from space, while a religious leader sees the transporter beam as divine intervention.

Onboard Discovery, the blurred lines between science and faith are altogether more personal. Lt. Stamet—whose increasingly strange behavior goes unnoticed by the rest of the crew—admits to Tilly that he saw his dead husband Hugh while he was using the Spore Drive last season. As a scientist, he initially assumed it was a hallucination, but now he’s not so sure. Was it Hugh’s ghost, or a construct of the mycelial network, or what? We know Hugh will return again, and “New Eden” gave us another hint at what that might mean.

Tilly had a big role in this episode, investigating the meteor they collected last week, and later rescuing the colony from certain doom. While Pike and Burnham are down on the planet, Discovery detects a lethal flood of incoming radiation. That red signal invited them here for a reason, and as Starfleet officers, it’s their duty to intervene—as long as the locals don’t find out what’s going on. (If you think this sounds like a lot of material for 45 minutes, you’re not wrong. The conclusion is kinda rushed.)

Knowing the meteor has tremendous gravitational pull (thanks in part to an explosion that lands her in sickbay), Tilly realizes they can use it to drag the irradiated matter away from the planet’s orbit. This leads to a fun bit of teamwork where Stamets uses the spore drive and helmswoman Detmer (Emily Coutts) gets to do some fancy piloting: “Initiating donut maneuver, sir!” However, that teamwork includes a strange new character: Tilly’s secret helper.

While Tilly is figuring out how to save the planet, she uses another junior officer as a sounding board. This young woman seems tailor-made for Tilly’s needs, and since no other characters interact with her, she instantly set off my Spidey sense for sci-fi hijinks. Those suspicions paid off because, at the end of the episode, we learn that Tilly’s new friend is actually an old friend, May Ahearn (Bahia Watson), whom Tilly hasn’t seen since they were kids. Oh, and May is dead. So now we have two ghosts onboard, and this one can’t be explained as a grief-induced hallucination.

My current theory is that the mycelial network is a conscious entity, and it’s communicating with the crew by embodying their dead friends. It can’t be a coincidence that the first two examples are Stamets and Tilly, both of whom work closely with the Spore Drive.

Getting to know the Discovery crew

“New Eden” reiterates last week’s optimistic tone, emphasizing the rapport among Discovery’s crew—and the pride they take in their jobs. Pike and Burnham are forming a friendly working relationship, Saru reaches out to Tilly as a mentor, and the bridge crew gets some long-awaited character development.

In previous Star Trek shows, a ship’s crew typically involved two tiers of characters: the main cast and background extras. There were a few recurring officers like Ro Laren in The Next Generation, but Discovery operates a little differently. With characters like Burnham, Tilly, and Saru in the foreground, the show has featured a consistent cast of named background officers since the start, although in season 1 they barely had any dialogue. Season 2 is rapidly expanding their roles, with Owosekun and Detmer as the new Chekov and Sulu, front-and-center during every bridge scene. We already know they’re good friends, and this episode revealed some backstory details: Owosekun grew up in a Luddite collective, and Detmer got her pilot’s license at 12. (Since Starfleet exploration vessels are always full of terrific over-achievers, Detmer fits right in.)

Captain Pike, our jovial new Space Dad, is also settling in nicely. The last two episodes provide a clear contrast between how Lorca demanded obedience as an authoritarian bully, and how Pike earns the respect of his crew. In the same way that last week highlighted Burnham’s personal evolution, “New Eden” features a direct callback comparing Pike to his predecessor. During one of the darkest episodes of season 1, Lorca told Burnham that “universal law is for lackeys; context is for kings,” hinting at his ruthless and hierarchical worldview. Pike’s version is much more forgiving: “Context can alter our perspective.”