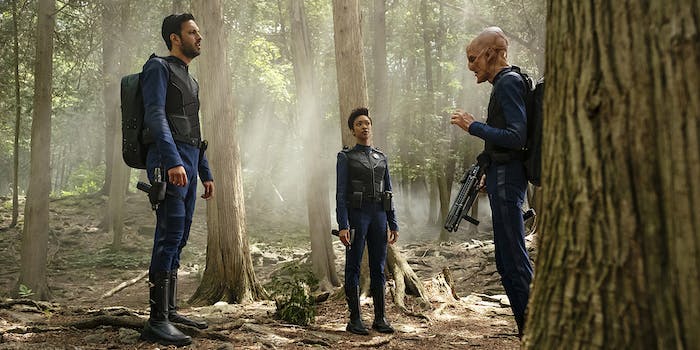 We can't believe this seemingly peaceful planet turned out to be dangerous!

In Starfleet Academy’s alien diplomacy class, there should be an entire semester devoted to Suspiciously Chill Planets. Do the locals offer you a magical elixir of peace? Do you stumble upon a strangely calming crystal? Do the village elders use a secret ritual to unify their followers? If so, run for the hills.

This was our first old-school “planet of the week” episode, written by veteran Star Trek novelist Kristen Beyer. It opens with a disastrous battle against the Klingons, where Starfleet loses a ship and confirms a worrying new development. The Klingon fleet is now equipped with cloaking technology, and Starfleet must find a way to track them.

Last week: Discovery‘s time-loop story was its best episode yet

Burnham, Tyler, and Saru beam down to the planet Pahvo, where everything vibrates at a unique frequency. They want to study a rock formation emitting a powerful signal, to see if they can modify it to find Klingon ships. Burnham and Tyler—slightly twitterpated after last week’s romantic interlude—enjoy the beauty of the forest, while Saru is characteristically anxious. The planet’s music is messing with his sensitive Kelpien hearing.

Pahvo seems to be uninhabited, but it’s actually home to a non-corporeal species. The Pahvans appear as a sparkly clouds of mist, complicating the mission. The Federation forbids interference with pre-warp civilizations, and Starfleet can’t use Pahvo’s crystal tower without permission from the locals. Saru must find a way to communicate with them, and fast.

As it turns out, the Pahvans live in total harmony with their ecosystem. And after seeing inside Saru’s mind, they have a unique solution to his wartime stress. Instead of helping with his mission, they brainwash Saru into a state of creepy serenity. Confident that Burnham and Tyler will soon understand, he destroys their communicators and announces that they’ll remain on Pahvo forever.

It’s a familiar Star Trek formula, although that’s not necessarily a bad thing. The only downside was the similarity between Pahvo’s mist and the Discovery’s spore drive. They’re visually identical, and both have mind-altering effects on tense, snappish characters. But that’s a minor quibble. The Pahvo scenes only took up half the episode, and I was happy to see more of Saru.

“My whole life, I have never known a moment without fear,” he tells Burnham, explaining that Pahvo gave him his first taste of freedom. Another interesting look at Saru’s Kelpien identity, although the show still needs to explore beyond his original “prey species” concept. There’s a ton of fascinating, unexamined subtext around Saru’s role in Starfleet.

Even in this crew of misfits, Saru is the most drastic outsider. He lives in complete isolation from his own species, and his crewmates make few allowances for his non-human behavior. Allegorically speaking, he has an extreme, untreatable anxiety disorder, surrounded by people who are effortlessly confident and brave. That dynamic follows one of the oldest themes of the franchise: the fallibility of Starfleet’s inclusive stance. Spock’s Vulcan heritage always set him apart, even among friends. The same can be said of Worf and Data, although The Next Generation acknowledged the problem with episodes like “The Measure of a Man.” As ever, cultural integration is a work in progress.

On the Klingon ship

While Saru communes with sentient glitter on Pahvo, we return to the Klingon fleet. Kol has solidified his leadership, while L’Rell schemes in the background. Tasked with interrogating the captured Admiral Cornwell, L’Rell offers to help Cornwell escape—but only if L’Rell can defect to the Federation.

Considering L’Rell’s duplicity in previous episodes, this is probably a ruse. However, we’ll have to wait until next week to find out. L’Rell and Cornwell get caught on the way out, and L’Rell seemingly kills Cornwell to avoid suspicion. Is Cornwell actually dead, or just unconscious? Her fate remains unclear, as does L’Rell’s. Kol recognized her disloyalty, and had her arrested.

The episode ends with the Klingons detecting a signal from Pahvo, where the Pahvans have misinterpreted Burnham’s request. Instead of using their crystal tower to reveal the Klingons’ cloaked ships, they set off a massive homing beacon. The Pahvans naively think they can bring the two sides together, and now Discovery must stay behind and protect the planet from attack.

Discovery’s Klingons have inspired a rather mixed response so far. Some viewers find it hard to engage with the combination of subtitles and expressionless makeup, and while I enjoy the Shakespearean loftiness of Voq and T’Kuvma, I’m starting to want more material. Kol’s characterization is thin, and we’re still waiting to see more of Klingon culture and politics. With Voq offscreen, L’Rell is the only Klingon with a complex arc and motivations; something that needs to improve if we’re meant to care about the Klingons’ viewpoint in the war.