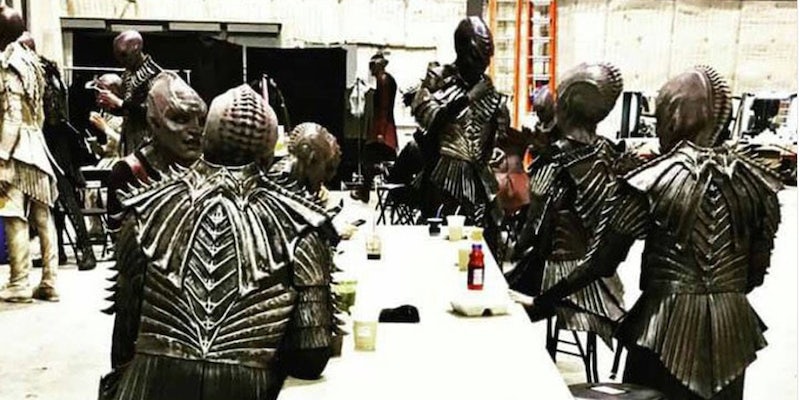 They look more like the 'Star Trek Into Darkness' Klingons than Worf from 'The Next Generation.'

Star Trek: Discovery‘s first behind-the-scenes video gave us a brief look at what we believe to be the new Klingon uniforms. Now, a leaked set photo shows a possible new redesign for the alien species.

Originally posted on Facebook, the photo was captioned “Hanging out with my new Klingon Crew today on the set of the new #startrek.” It shows the spiky armor we saw in the teaser clip, worn by a group of actors in prosthetic makeup.

CBS hasn’t confirmed that these are Klingons rather than another alien species, but the prosthetics and armor strongly suggest that they are. Plus, we already know a Klingon crew will play a major role in Discovery.

The Klingons have gone through several redesigns over the course of the franchise, beginning with a lightly modified human appearance in the original series. Then for the first Star Trek movie in 1979, the Klingons gained forehead ridges, prosthetic teeth, and costumes inspired by Viking culture and samurai armor. This look was updated for the most well-known version in The Next Generation, with Worf and his compatriots sporting long, bushy hair and prosthetic teeth. Klingons also appeared briefly in the alternate timeline of Star Trek Into Darkness, with a newly hairless look.

There’s actually a canonical explanation for this evolution, acknowledged when some of the Deep Space Nine crew traveled back to the era of the original series. They’re surprised to encounter some oddly human-looking Klingons, and Worf states, “We do not discuss it with outsiders.” The physiological change was later explained as the result of something called the Augment Virus, caused by Klingon genetic experiments.

Star Trek: Discovery takes place about 10 years before the original series, meaning there’s a canonical argument for it to use the human appearance of the 1960s Klingons. However, Discovery‘s creators were always planning to reimagine some of Star Trek‘s familiar aliens—and for good reason. Discovery represents a new era for the franchise, and in the case of the Klingons, the old makeup looked suspiciously similar to blackface. This is an opportunity to correct that awkward period in Star Trek history.

Judging by the leaked photo, the new Klingons bear more of a resemblance to the ones we saw in Star Trek Into Darkness, with elongated heads and armor that looks kind of insectoid instead of borrowing from a recognizable human culture.