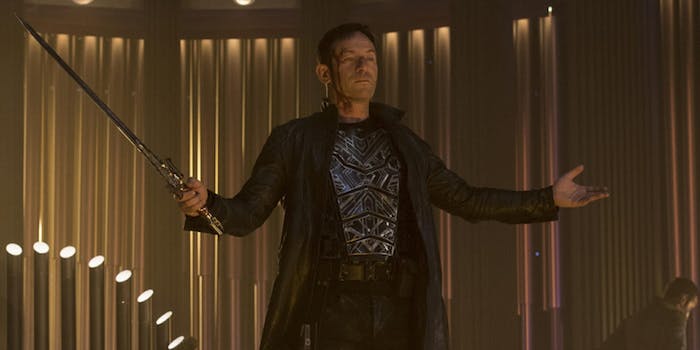 Episode 13 provided an excellent end to the Mirror Universe arc.

Saru, my brave yet anxious newt! My tall and speedy pal! Oh captain, my captain! Faced with a no-win scenario, Saru delivered exactly the kind of inspiring speech we expect from a Starfleet captain, taking the episode’s title very literally: “What’s Past is Prologue.” With Lorca unveiled as a Mirror Universe imposter, Saru offers the crew a second chance at their maiden voyage. It’s essentially a Death Star mission with the Emperor’s palace as the target, destroying its apocalyptically destructive version of the spore drive.

This cements the idea of Star Trek: Discovery as a season-long character arc for the crew as a whole, structured like a single episode of the earlier shows. The crew began in a place of moral uncertainty, lacking confidence under Lorca’s wildly unethical leadership. They floundered during chaotic circumstances, but now that we’ve reached the final act, they’ve rediscovered their right to self-determination.

It’s beautiful how quickly the mood changes after Saru inspires the crew to do something good. Even under dire circumstances, we see Stamets and Tilly being cute and supportive of each other, contrasting with the tense atmosphere of Lorca’s fear-based command.

To rewind for a moment, this episode was satisfying in an entirely predictable way—which is, just to be clear, not a criticism. Most of Discovery’s so-called twists are intentionally signposted, and the Mirrorverse arc concluded much like the third act of an action movie. Oh, the crew needs an inside man to disable the shield so they can blow up the enemy’s ship? You don’t say. That translated to a fun sequence of standoffs between Emperor Georgiou and a rebellion led by Lorca, both of whom were, in their own way, battling for control over Michael as well. (They also achieve much better fight choreography than anything we saw in earlier Star Trek series, one of Discovery‘s under-appreciated qualities.)

Unlike the usual cliché of villains keeping the hero alive for no good reason, Georgiou and Lorca are both personally invested in Michael’s survival. Georgiou remains in denial about her attachment until the last few scenes, but Lorca is explicit about his emotional motives. Mirrorverse Michael was his lover, and in her Starfleet counterpart, he found an admirable replacement. It’s easy to see how this could’ve gone wrong, which is why you hire someone like Jason Isaacs to sell it. He plays the kind of villains who are equally fun to watch and fun to root against.

In earlier episodes, Lorca’s interest in Michael was weird but not obviously romantic. Now he’s shown his true colors, their relationship feels like a parable for a certain workplace dynamic. Namely, “Don’t let creepy men steal your power.” Lorca loves Michael but not as an equal. He wants to use her skills to bolster his own achievements. Fully aware that she’s not interested, he manipulates her into a position where she owes her life to him. This was already (subtextually) the case from episode 3, when he rescued her from prison and offered her a chance at redemption. He tried to position himself as her only route to salvation, but as Michael regained her confidence, she never really fell under his spell. Now in the Mirrorverse, we see the balance shift.

Lorca is a classic supervillain with One Weakness, leading to a beautiful moment of face-crumpling sentiment when Michael offers herself up as a hostage. Defeating Georgiou was a political victory, but this is a personal one. Lorca saw Michael’s inner strength, mistook it for his own brand of ruthless power, and decided they were made for each other. He doesn’t understand that her Starfleet ethics are a strength rather than a weakness, which is why he doesn’t see her betrayal coming. And while he spared her life out of greed, she spared his because it was the right thing to do.

Not that her mercy made much difference, of course. Georgiou immediately stabs him in the back with her extremely shiny sword. In turn, this leads to a spectacular moment where Lorca tries to fall tragically into Michael’s arms and Michael steps aside like, “Uh, no thanks.” It’s all very Kylo Ren.

Georgiou’s survival is one of two big surprises coming out of this episode, joining L’Rell as Discovery’s second prisoner. Michael rescues her and beams aboard at the last moment, as they blow up the palace and ride the shockwave back home. I’m a little dubious about the potential for a Georgiou redemption arc (she’s a murderous fascist who literally ate slaves for dinner!), but it makes sense for Michael to save her. She’s still mourning the other Philippa. And of course, who would pass up the chance for more Michelle Yeoh? I won’t be surprised if Evil Georgiou dies by the end of the season, but it would be fun to see her become the Q of Star Trek: Discovery, showing up every once in a while to stir up trouble.

Returning home with Saru as the new captain, you’d think the crew might briefly catch a break. But no. After escaping the Mirrorverse and saving the mycelial forest from Mirror Stamets’s plague, they arrive nine months late. Apparently, the spore drive really was instrumental to the war effort, because, in its absence, the Klingons have already beaten the Federation. Were the showrunners lying when they said season 2 would move past the Klingon War? Or can Discovery clear this up in just two more episodes?