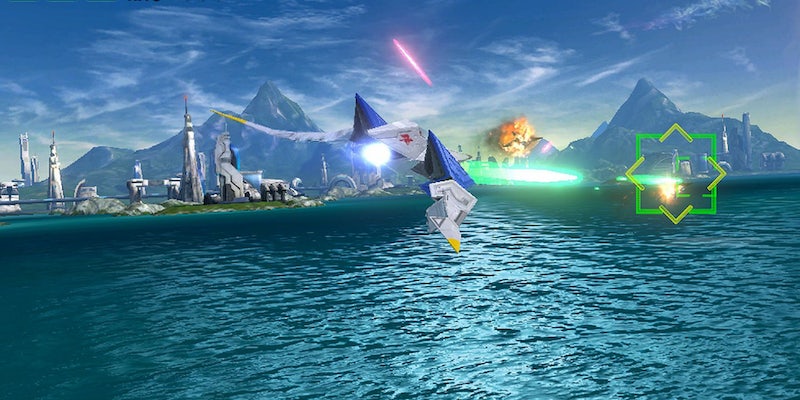 Star Fox Zero fails to capture the magic of its predecessors

The long-awaited return of Fox McCloud leaves too much to be desired.

Star Fox Zero feels like a missed opportunity, one that could have defined a cool universe outside the bounds of Nintendo fandom. I wanted more from this reboot than a rehash. 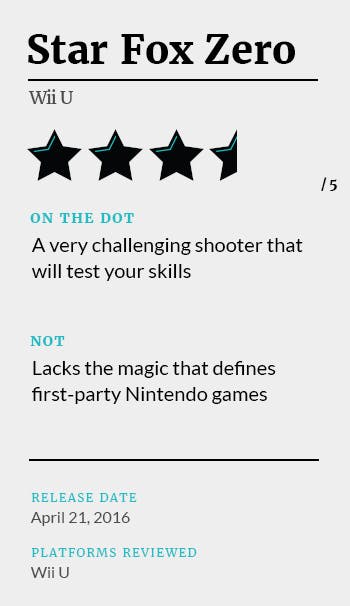 In 1993, Nintendo released Star Fox for the Super Nintendo Entertainment System. It’s the story of the anthropomorphic animals of the Lylat star system who are defending their home planet Corneria from banished scientist Andross and his army.

Star Fox is how a furry dreams of action sci-fi movies, or what happens when the Muppets are given spacecraft and told to go blow each other up. You can’t take the story too seriously as it’s presented in Star Fox Zero, but watching the game’s prologue it occurred to me that maybe it would be possible to make players genuinely care about these characters beyond pure devotion to the IP.

The prologue is a “show don’t tell” exercise that details the story of James McCloud, an expert starfighter pilot and father of Fox McCloud, the hero of the Star Fox series. James was sent on a mission to defeat the evil Andross, and now, five years later, the war between Corneria and Andross’s homeworld Venom has engulfed the Lylat system.

How awesome would it have been for Star Fox Zero to have taken advantage of the opportunity presented by this reboot to tell us the story of James McCloud, and to develop all of these characters, even just a little? To add some depth to the Star Fox universe and given us a new avenue to invest in this world?

You could say that a game about foxes and wolves flying starfighters isn’t meant to be taken seriously, and is only meant to be frivolous fun, and that the idea of adding some depth to this world sounds silly. But we care about Jim Henson’s characters even when they’re in preposterous situations, and I think the same could be done for Fox McCloud and his compatriots and antagonists.

Star Fox Zero could have been something more than a game about on-rails shooting mixed with arena-style combat, a control scheme I had to wrestle way too often.

There are four vehicles you can pilot in Star Fox Zero. The familiar Arwing is a starfighter, and can also transform into a Walker mode that resembles a chicken, especially when the Walker flaps its wings while falling as if to slow its descent.

The Gyrowing moves like a helicopter and is equipped with a robot named Direct-i who can be lowered from the vehicle on a tether. Direct-i can pick up objects that the Gyrowing can’t reach and hack computer terminals to unlock doors. The Landmaster is a battle tank that can also transform into a slow fighter craft that can only operate at low altitudes.

All four vehicles operate more or less the same way. On the television you see a third-person camera view of the vehicle, and on the Wii U GamePad you see a cockpit view. Pressing the select button on the GamePad swaps the screens back and forth between the GamePad and the television. Looking through the cockpit is supposed to make it easier to line up precision shots as you aim the targeting reticle by using the GamePad’s motion controls.

A single laser can be upgraded to dual lasers if you pick up a laser powerup, and the guns will do more damage if you power them up again. Each vehicle is also armed with bombs, and you can pick up additional bomb tokens within the level. You can also charge up the laser or cannon depending on the vehicle and fire a plasma ball or a missile that can lock onto targets.

If you press the left trigger you can lock the camera to a target to track enemies if and when they get behind you.

The on-rails portions of Star Fox—arcade-style shooting levels where you’re presented with hordes of enemy starfighters, tanks, drones, capital ships, and gun turrets to shoot down—are interspersed with “all range mode” battles that give you freedom of movement within a wide area, and usually involve boss fights or otherwise taking down large, specific targets.

Your goal in a level, beyond not dying, is to get as many “hits” as possible. Shooting down an enemy starfighter or gun turret usually counts as one hit. Shooting down a capital ship or an armored walker counts as multiple hits. If you get enough hits you collect a gold trophy, and there are also medals and other collectibles to find. You can return via the campaign map to any mission you’ve previously completed.

The main campaign and the three training missions for the Walker, Gyrowing, and Landmaster took me a little under seven hours to beat. I imagine Star Fox Zero would have provided even more playtime had I managed to beat the game and unlock whatever content that followed, but after beating my head against the wall trying to kill the final boss I finally put Star Fox Zero down.

The final boss fight is brutal. If you fail the mission you have to return to two prior stages that are not difficult to beat, and therefore just feel like time-wasters before you get another crack at the final boss. It’s an ungenerous checkpoint in a mission that never should have been structured thusly, and I had little patience for it.

The final boss battle also requires you to use the cockpit view mode that I spent as little time in as possible using during the campaign because I wanted to see the game world around my Arwing, Gyrowing, or Landmaster rather than looking through the cockpit’s limited field of view.

I did not like having to use the GamePad screen for the cockpit view. Dividing my attention between my television and the tiny screen on the GamePad was a constant annoyance, and a few times made me feel nauseous for having to look back and forth between screens so quickly.

In a moment of frustration over an unrelated issue I turned to a help guide. I avoid help guides while reviewing a game, because they can ruin the sense of discovery. In this case, it’s the way I discovered that you could swap screens between the GamePad and the television. I felt like an idiot when I realized this, but I don’t remember Star Fox Zero ever making this clear.

The select button you press to swap the screens between GamePad and television is also right below the start button, which pauses the game, so quite a few times I accidentally paused Star Fox Zero while trying to swap screens.

Eventually I started looking down at the GamePad to make sure I was pressing the correct button. It still meant swapping my attention between GamePad and television like I’d been doing for hours, but it no longer made me feel nauseous, which was an improvement.

This is the usual frustration I feel whenever the GamePad is used as anything other than a second screen to display maps or inventories, or other elements I appreciate not cluttering the main screen where the action takes place. Star Fox Zero is another instance that convinces me that shooters on the Wii U need to offer the Wii U Pro Controller as a default control device along with and potentially in replacement of the GamePad.

Precision shooting using motion controls that run off an ungainly, 10-inch tablet is clumsy at best. I often felt like I was fighting the controls in Star Fox Zero, whether I was trying to accomplish precision shots or not. It was especially frustrating because Star Fox Zero is largely a fast-paced shooter where you’re trying to hit hundreds of targets in the course of a level to earn the gold trophy.

The worst aspect of the GamePad’s incorporation into Star Fox Zero is that almost all of the game’s in-mission dialogue is delivered via the GamePad’s pair of tinny speakers. I think I get the idea—it’s as though you’re using a control screen in your vehicle—but I would have piped the dialogue through my surround sound stereo given the choice.

If you purchase the physical edition of Star Fox Zero, it includes a tower defense mini-game called Star Fox Guard, where you switch between security cameras armed with laser guns and blast robots trying to work their way through a simple maze to the center of the base you’re protecting.

You will be able to purchase Star Fox Guard separately on the Nintendo eShop. Since not everyone will receive this game with Star Fox Zero, I’m not going into a detailed review. Suffice it for now to say that Star Fox Guard is cute, fun, and it uses the GamePad the way it’s used best: to check a map to see where the robots are that you need to blast, to tap on cameras to switch between them, and to use the stylus to move cameras into new positions around the base. The main action takes place on the television.

Beyond my issues with the controls, the final boss, and leaning too heavily on fandom rather than redefining these characters for a fresh audience, what bums me out about Star Fox Zero is that for me it lacks the special something that defines a Nintendo game.

Nintendo doesn’t sell games based on the strength of its hardware or triple-A spectacle. First-party Nintendo games like Splatoon and Super Mario Maker have something indefinable that makes them special.

Star Fox Zero is wrapped around iconic Nintendo characters and hails back to the glory days when Nintendo practically ruled the roost in console gaming, but for me it doesn’t have the Nintendo magic. Maybe that’s because Star Fox Zero was developed in partnership with Platinum Games, a studio that’s known for working on action games and shooters.

All the skill challenge I’d expect from a Platinum Games title is certainly present in Star Fox Zero. This game is not easy, but difficulty alone isn’t enough to make Star Fox Zero not feel thin. This is not what I’d hoped for after not seeing Star Fox on a non-handheld Nintendo platform for 11 years and looking forward to his return.

Disclosure: Our review copy of Star Fox Zero was provided courtesy of Nintendo.