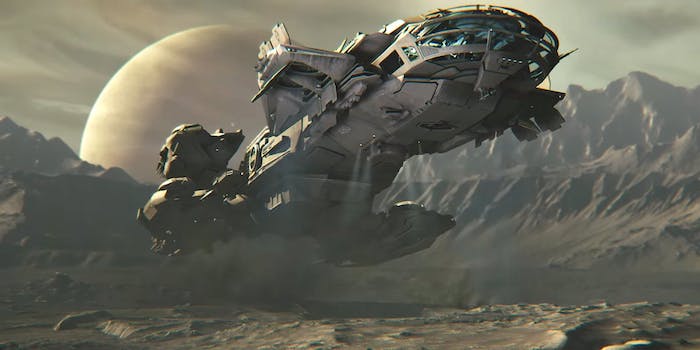 Never mind that new car you want to buy. That’s boring. You can buy a new spaceship for a fraction of the cost.

Star Citizen, the 3D space combat/exploration/merchant simulator has raised over $50 million, entirely from crowdfunding. Developer Cloud Imperium Games is largely adding to this pile of development funds through the sale of virtual spaceships, which can cost hundreds of real world dollars each.

Early marketing for the game largely took the shape of the equivalent of automobile advertisements, but for starships. Instead of praising leather interiors, anti-lock breaking systems, and fuel efficiency, the ads talked about weapons systems and combat maneuverability.

The actual game promises the ability to walk around ships, so imagine the crew here in the video as player avatars. There’s no word yet about players being able to walk around planets, but one of the Constellation variants for sale comes with a rover vehicle, so who knows. We wouldn’t put it past Star Citizen, not with the amount of money this game is making.

The trailer may be more short film than future car commercial, but don’t worry. If you want to get your virtual shopper thing on there’s a freaking 16-page brochure for the ship.

The cheapest Constellation-class ship costs $150. The most expensive model costs $350. Again, this is real-world money, not some sort of in-game currency that sells in bulk via the expenditure of real world dollars, which is common in most video games that offer these sorts of transactions.

The creator of Star Citizen, Chris Roberts, is one of the few bona fide legends in the game development world. He is the creator of Wing Commander, the 3D space combat franchise that pioneered cinematic games, branching storylines, reactive soundtracks, and full motion video cutscenes. Roberts cast actors like Mark Hamill and Malcolm McDowell in later games in the Wing Commander franchise.

Roberts says he took a break from the industry because it didn’t offer the kind of technology he needed to keep up with the sort of video games he wanted to make. He stormed back onto the scene after a stint as a Hollywood producer, working on movies like The Punisher, Lucky Number Slevin, and Outlander.

He came back because the game engine technology had finally advanced to the point where he could finally make the types of games he wanted. Every purchase of a Star Citizen ship is a vote of faith in Roberts’s ability to deliver on his promises.

He certainly has the development money to make good. Expect that $50 million total to continue growing. When we reported on this story four months ago, the Star Citizen crowdfund total was only $43 million. Only.