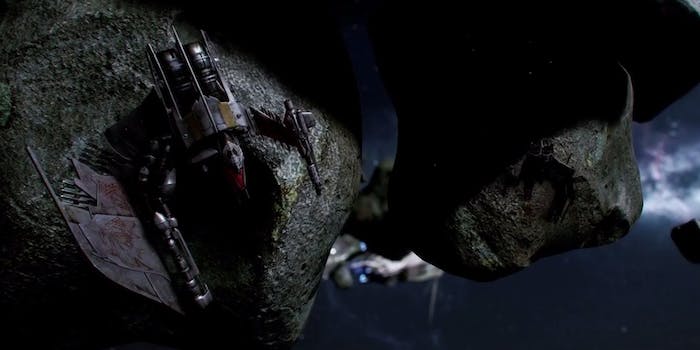 This indie game has raised $43 million—all via crowdfunding

What started as a Kickstarter in 2012 just won't stop growing.

The indie video game that set a world record for crowdfunding is showing no signs of slowing down.

The game is a persistent online multiplayer space combat simulator. That’s a mouthful, sure, but the idea is incredibly exciting. The game will harken back to the days of early PC space simulator Wing Commander and bring back the excitement players felt exploring the unknown reaches of space. Except, unlike in those earlier titles space will be filled with your friends and thousands of other players flying around.

Star Citizen is marketing itself as a game for PC gamers. The game will most likely require a high-end PC gaming rig to render the vividly detailed worlds inside the massive universe being created.

That appeal to the hardcore gaming crowd is one reason the game has raised so much money. And here’s another: It’s releasing certain playable modules to early backers. Those who are most excited about the game have been able to play certain segments before the official release. Akin to Minecraft or DayZ, other games that had raised tons of money before their release, Star Citizen will gradually release more and more of the game. This makes players feel like they’re both getting their money’s worth and contributing to the overall end goal.

The game currently has more than 440,000 backers. After this latest milestone, Cloud Imperium Games has added another stretch goal. If the game reaches $44 million in funding, a hologram map room will be added to the game. The map room will be an incredibly detailed representation of the Milky Way, helping players better traverse the universe.

Although the total dollar amount may seem absurd, especially for a crowdfunded video game, it’s important to keep in mind that many top video games require massive budgets. Halo 3, for example, had a development budget of 60 million. The recently release Grand Theft Auto V had a development and marketing budget of 265 million dollars. Both games went on to become profitable on day one.

With the success of Star Citizen, it wouldn’t be surprising if more studios adopted the endless crowdfunding model. It seems rather arbitrary to have a crowdfunding effort only last thirty days. Games require years to develop. So one might as well allow word to spread and have people buy into the game when they’re comfortable.

And if they do gain in popularity, Kickstarter’s response will be interesting. Will it also implement the infinite crowdfund? If not, developers may opt to follow the Star Citizen model and run their own crowdfunding initiatives, push out the middle man, and keeping all the net gains.

Star Citizen is scheduled to launch sometime in 2015.